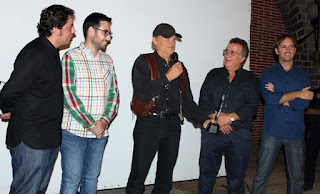 The sixth edition of Almeria Western Film Festival pays tribute to one of the biggest stars in the history of the European western.

The town of Tabernas Fort Bravo was all dressed up Saturday afternoon to welcome the activities of the sixth edition of Almeria Western Film Festival (AWFF) but, above all, one act in particular: a tribute to Terence Hill.

The smite inseparable companion of Bud Spencer with the spectacular blue eyes came to the Hall of Carriages at Fort Bravo shortly before sunset. Not for a duel, but to receive the deserved Taverns Film Award, finally, is in his hands.

The screening of the film 'God Forgives… I Don’t' (1967) building excitement among those present at Fort Bravo while awaiting the arrival of the Italian actor. A very significant film for Tabernas, since it was filmed here; and for Hill himself, because during this filming he met his future unconditional friend on and off the screen, the great Bud Spencer.

He first mentioned, after receiving the statuette, from the AWFF director’s hands, Juan Francisco Viruega, and the host mayor, Jose Diaz. "Here in Almeria I found Bud Spencer, who appeared with me our comedy movies" recalled Hill.

Also, ironically, "I was also in Almeria when I received a call from his son" in which he announced his sad demise. Moments like that make this land a special place for him. A place that "I like its people and because here is where I began my career," said on the earth that lives "in my heart". Words he spoke before hundreds of people filling the room to see one of the childhood idols of several generations.

An icon, in the film history ... there have been many ways of referring to Terence Hill in Tabernas during yesterday afternoon, an appointment to say thanks by the director of AWFF for whom "it is a dream" to have Hill "because you’ve helped to make many people happy and for that festivals like this that are made to honor the genre."

And the excitement was palpable. Nobody wanted to miss the opportunity to be photographed with their idol, to dedicate a few words of gratitude or asking some dedication. In fact, he signed posters, photographs and even charcoal portraits....... 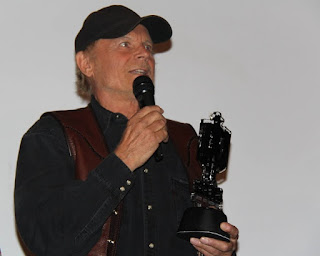 There have also been souvenirs and gifts for Terence Hill so he would not forget his return to Tabernas. Among them, a detail that thanked him especially for the book 'The Habichuela, a life in the Almeria theater', written by Juan Gabriel García. A character, the Habichuela, whose figure has excelled in several moments of his visit to the town where he shot some of his most acclaimed films.

Terence Hill has received the Tabernas Film Award which in previous editions of AWFF has fallen on other major players in the western genre such as Sancho Gracia (2015), Enzo G. Castellari (2014), Monica Randall (2013) and Sara Montiel (2012 ).

Terence Hill in his role as director faces the filming of 'They Called her Maryam' which begins tomorrow in the province of Almeria. In the coming weeks, Hill will head this new adventure film. "The story begins in Italy," said the director, "and reaches North Africa". Little details of the film have been released, although it has been acknowledged that it will be "a motorcycle tour through some of the most beautiful landscapes in Spain and we want it to be a very beautiful film."

The intention of shooting in Almeria became known earlier this summer when Terence Hill was discovered in the  Los Baños de Sierra Alhamilla while he scouted locations for the movie. Weeks later came into contact with the city of Tabernas where the tribute was held at the AWFF.