Until his time came. Almería Festival dispenses with the image of Clint Eastwood
A lizard and a thistle flower borriquero form the new brand now called FICAL

For fourteen years, the official image of the International Short Film Festival 'Almería en Corto' has been the enigmatic silhouette of a cowboy silhouetted against the sun over six decades scorching kilometers and kilometers of film on this earth. A shadowy figure, perfectly recognizable in their anonymity, which in turn pose reminded nameless man who looks and silences put Clint Eastwood in 'Dollar Trilogy' of Sergio Leone. Some white squares not only ratified Overture poncho wearing the antihero but marks evoking celluloid.

Coinciding with the change of name of the great audiovisual appointment of the province, which this year becomes International Film Festival Almeria (FICAL), the Council has introduced a new logo that seeks, according to the institution, combining "wildlife , flora and sea "to represent the province and all manifestations and film genres: an image, designed by the Sevillian Israel Tirado, represented by the" flower Scotch thistle "and" lizard Cabo de Gata-Nijar "path "in the colors of the sea" and replace also in the estatuillas- the author of 'Unforgiven'. A decision has not been well received by fans of the festival, who see the American filmmaker to one of the most recognizable icons to link Almeria with the screen.

As Trinidad Solano, first director of 'Almeria en Corto' explains in the book 'Clint Eastwood never return to Almeria' (Lagartos), journalist Antonio Sanchez of Amo, the author of the original image ( "a success") was Nacho Martinez, Koniec. "It is a creation that reflects the spirit of the film almeriense to see who first figure cowboy associate it immediately with the festival".

In the same vein the Madrid filmmaker Miguel Larraya ( 'Afterparty', 'Everybody knows'), winner in 2008 of the prize for best script in the video contest with short 'Stockholm' is expressed. "If you think about the landscape of Almería, you think of the 'spaghetti western'. A good option would have been reestilizar that image. Aesthetically it is a prize very identity. "

To Mariola Martin, the program 'Film Series' (Candil Radio), everyone has in mind the silhouette of Eastwood as an emblem of the festival. "Apart from the new name and the new image should not delete it. It is a true icon with which depicted the history of cinema in Almeria ".

Without going into the new proposal, the designer Carlos Dominguez (store owner shirts and items Film Riot Cinema Shop) believes that "a new phase involves a new corporate image" but believes a "mistake" run out "the biggest icon film shot in Almeria. " "It could have been retouched, I have upgraded it is as if to shield Atleti you take away the bear and the strawberry tree."

For his part, Francisco Conde, actor, co-writer and producer of ‘La madriguera’ (The Burrow), a film that opens FICAL, the change of name of the festival and its commitment to the film itself made this change "necessary". "I understand that might shock but it was also vital renewal in the picture".

Miguel Arranz, illustrator and cartoonist of voice, offers his vision of change in the vignette that illustrates this article. "The new logo could be used for tourism promotion but Eastwood is a symbol of cinema in Almeria, something iconic, almost like the Osborne bull. Create a prize with his figure was the best he had done the festival. Although the image change, I hope Clint continue to be in the awards ". 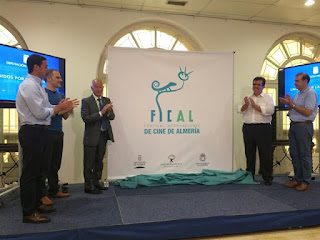