When Yul Brynner rode by Agost


50 years after the film was shot in the Sierra de La Murta "The Return of the Seven" is still remembered.

[Preparing an exhibition for July, routes by car around the stage, a concert and a flea market in the West.] 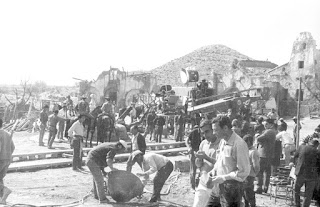 Older residents still remember how in the streets of the village on many afternoons riding a black horse was the imposing American film actor Yul Brynner. It was two months in 1966 that the older Agostenses never forgot. Agost became a Mexican village in the nineteenth century and its arid valley was the perfect landscape to film the sequel to the very successful western “The Magnificent Seven” whose soundtrack is synonymous with Western movies which were so successful at the time. Filming in Agost “The Return of the Seven” was an event and became national news. Agost now remembers fifty years later of its foray forever in the world of cinema. A small town in the province of Alicante became the scene of a cowboy movie for which almost everyone worked directly or indirectly and whose roster of actors was international and the working language was English. Agost pottery tradition did the rest, there bricks were built for stuffed straw houses they loved the American director Burt Kennedy so well they burst. The arid mountain scenery of the Sierra de La Murta still reflects exactly like in the film, but there is no trace of the two villages that were built. The town benefited from the film shoot that although more modest than the film that preceded it, gave work and prosperity to many locals. 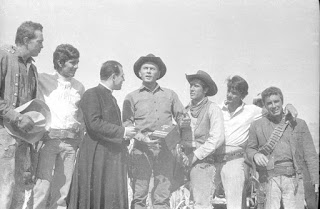 Many residents became extras in the film, everyone who had a car ended up working on it and the young Incarnation Montoya was elected twice to double actress, Elisa Montes, to shoot the most complicated scenes. She worked in a brick factory and several of her co-workers also were selected as extras. For her, who then was only 18, was a "very nice time but just too early in my life experience”. She participated in scenes that could entail more difficulty for the lead actress like riding on a mule or climbing up a mountain and during the time she worked in the film she was picked up every day to go to the shooting location where she ate in the same place as the actors. 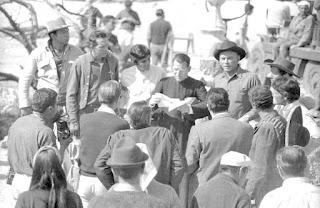 From that shoot she will not forget ever the fall with a child in her arms when the mule quickened his pace and threw them both to the ground. The child was a gypsy, like many of the extras who participated in the film and came from Madrid and then settled in Alicante. "They started out the gypsies to see what had happened to the boy and I could not stop their mourning and then came everyone from film to console me, the director, actors ...". The only thing that she keeps from the shoot is a photo taken just a few minutes before falling off the mule and sent them flying. After completion of the film "with the boy shooting" of which she has not forgotten his name. Fifty years later, still fondly he remembers those working in the film and how far your life and theirs was apart. "They marveled that I worked in a factory," she recalls that it impacted them so much. 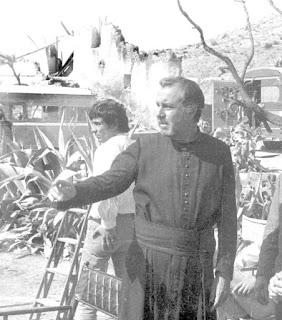 José Manuel Ivorra, “The Return of the Seven” gave his father a lot of work. He was ceramist and having a small oven was able to adapt to the needs of material needed in the film. He made numerous pieces, jars, vases, pitchers, bowls for scenes and for daily consumption, such as pitchers with which cooled off during filming. "They were not stingy, they paid what you asked them. My father doubled the price of things and the paid him handsomely," he recalls. From his workshop came a bell of mud that did the trick as if it were real because they painted it copper color and the metal sounded falsely to get the shot. And "at the end of the film he leaves the source that made my father." Recalls that "everyone would see the shooting" and to Madrid came rolling extras scenes on horseback. Potter looks at scenarios where the film was shot and imaginatively put what was in them, remembers exactly where the towns of which now only pitas and American prickly pears were planted. Today only the landscape and these plants are preserved. He came to the set to take the material and what impressed him most was to see how to simulate night scenes a filter was placed, and having seen the Spanish actor Fernando Rey who was dressed as a priest.

Agost City Council wanted to celebrate the half century anniversary of the filming and prepared activities and a festival for the last weekend of July. They intend to make a Fair West and Route Magnificent Seven with carriage rides through the scenes of the film, which will also be screened. Toni Lopez, head of the Local Development Agency, explains that it prepared a concert in which the legendary soundtrack will be the star. The Agency has contacted the film critic Antonio Dopazo and the movie buff and director of the Film Festival Elche Paco Huesca with the idea of ​​making an exhibition among the collection of Huesca there are movie posters, film photos of color scenes and even an autograph from Yul Brynner. The Agency called on all neighbors with film material to contact them to expand the sample with all that is still preserved. Among the material collected they have an autographed photograph by Salvador Molina protagonist ceded by the Municipal Archives of Agost. 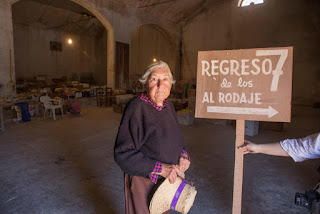 It has survived over fifty years a sign indicating how to reach the shooting. Delfina Marco keeps it in whose cellar was filmed for two weeks the scene of the cockfight. At 84, Delfina recognizes that the language barrier made her have little interest in what was happening at her home. She remember perfectly that Yul Brynner loved the fried almonds that were proffered. The scenario has nothing to do, "it was filled with barrels, cobwebs, put in stairs and decorated doors that did not reach anywhere. Here are they did their makeup and changed, but I did not understand because of the language barrier". "They were going about their business and when they finished they got into their caravans. Ate and slept outside in Alicante," recalls the owner. Filming has marked forever Agost as a film set in the American West, it brought prosperity to the people and left 66,000 pesetas who helped build the Colegio La Milagrosa.
Posted by Tom B. at 5:41 AM