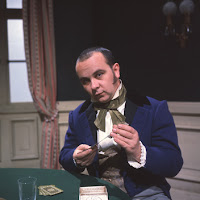 RIP Hans Korte. German stage, film, TV actor and voice dubber Hans Korte died in Munich, Germany on September 25, 2016. Born in Bochum, North Rhine Westphalia, Germany on April 28, 1929 and as a child he performed with the Cologne Opera Children's choir. After studying music, he got his first break in the theater in Augsburg and Dortmund, eventually becoming a key performer and director on the Munich and Hamburg theater scenes. His TV acting roles won him several awards, including the "Deutschen Darstellepreis" (German Actor Award) for the part of Himmler in "Der Vater eines Mörders" (The Father of a Murderer) and the Adolf-Grimme Preis (Adolf Grimme Prize), along with the Goldene Kamera (Golden Camer) for "Der große Bellheim." He appeared as Major Dunham in one episode of the 1969 TV series ‘The Leather stocking Tales’.
Posted by Tom B. at 8:15 AM