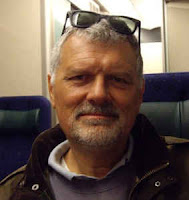 One of the first soundtrack composers to adopt the synth, Fabio Frizzi's name is synonymous with Italian horror of the 1970s and '80s thanks to his unforgettable collaborations with director Lucio Fulci among others. We caught up with Frizzi in the midst of his 'Fulci 2 Frizzi' live concert tour.

When did you first decide to become a musician?

A true decision I've never taken, in the sense that it is life that often decides for us. I've liked music since I was a child; it was like a cult in my family. The moment I tried to push on that possibility, after the experience of pop and classical groups of my adolescence, was at the end of high school. My passion was strong and to be able to live off working with music was, for me, the greatest ambition.

Did you initially set out to compose soundtracks?

No, it was not my first idea to become a soundtrack composer. I liked rock, pop, vocal groups, baroque music; I liked to play with my friends musicians. But my father was a man of cinema and, as you can imagine, his love of film was very contagious. Experiencing the daily life of my father and his world, I also learned about this aspect of music, the soundtrack. The emotion aroused me listening and listening to the musical themes that struck me watching a movie, and made me realise that this could be my way. 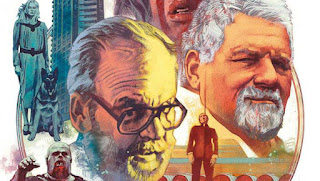 You're best known for your collaborations with director Lucio Fulci, and you were arguably his most important collaborator. What can you tell us about the working relationship between yourself and Fulci?

I speak about my relationship with Lucio Fulci very often, but sometimes I rediscover in my memory some detail apparently forgotten. Surely the figure of Fulci for me, in those years, was that of a teacher, a person who led me to search for an artistic personality, a craftsmanship which then was useful throughout all my working life. And then, over time, the collaboration has turned into a beautiful friendship. His artistic heritage is for sure one of the most important things that I am experiencing at this time.

You were one of the first composers to employ heavy use of synthesizers. Was this for budgetary reasons initially? Were you influenced by the progressive rock scene of the '70s?

Yes, these were the two fundamental elements that started me off using keyboards, from the beginning of my career. The budget element has always been one of the painful elements of the composition of soundtracks in Italy. One of my old publishers, Adriano Merkel, when we spoke of the cost of the soundtrack and I was complaining of the insufficiency of the amount proposed to me, he answered me, with a strong Roman accent, "You have to use the equipment." In his slang he meant I would have to learn from these new technologies, to lower production costs. The other element was also a strong and important one, the new trends that mixed rock with classical reminiscences was very close to my taste. The prog groups made great use of keyboards; that's where I fell in love, for example, with the Mellotron.

You've written many riffs that send a shiver down the spines of anyone who hears them (The Beyond and The Psychic are personal favorites). Most music is purposely designed to make listeners feel good; is it more difficult to create a feeling of unease through a piece of music?

Very often, to emphasise tense situations or strong images, one is led to explore the world of dissonance. And there is no greater thing than using some dissonance in a melodic path, say reassuringly. It's a little like displacing the listener. All of this should however be done again following his compositional instincts, the use of a technical end in itself is never a winning choice.

What do you think is the most important aspect of a good score?

Personality. I think a soundtrack must have a distinct character, must be different, interesting, well connected to the film, the story. On the one hand it must be objective, obviously right for that situation, but on the other it must represent in the best way the thinking and personality of the composer. One of the greatest compliments I can get is when people say, "I was watching the movie. I did not know you had written the music, but at some point I said 'It can only br Fabio Frizzi who has written this music!'"

Do you think the score is more important to horror movies than other genres?

Well, for the strength of the feelings that you want to deliver to the listener, for the kind of strong message that the horror film always brings with it, yes, probably it is. I would say that all movies, living out of a spiral of tension that grows from beginning to end, they need a significant music. And the horror is the prince of this category. Although I must admit that in any film, even in a love story, the theme song is always a great protagonist.

Are there any recent film scores that you've found particularly impressive?

Probably in recent years the soundtracks, like many forms of art and entertainment, I perceive more aligned to the styles of individual genres. I believe it is the consequence of a globalisation also of these forms of culture, except in many cases of young composers who have found their way. There are today too many good scores, but the other day in LA I bought an old LP with the music of Charade by Henry Mancini. When I put it in the turntable I got excited a lot.

The synth sound has come to define horror of the mid-70s to late '80s, but it's been making a big comeback in recent years with movies like It Follows and The Guest, and of course with yourself and John Carpenter playing live concerts. Why do you think it's enjoying a current revival?

At a time like the one we live in, I would call post-historical, digital reproduces everything, it has taken possession of our lives. The cars are all alike, the phones, there is nothing that tastes "temporary". So the human being goes in search of the true flavours - he drives a 1960s Jaguar and feels good, or he buys a carpenter's table from 1900 and lives a journey through time, one with true flavors. The synth has the same charm, when we used them we often showed their limits, but we were trying to maximise them, inspired by rhythms and melodies. Today they have become legends and many young musicians try and use these masterpieces of modernism, giving them life and voice. A bit as we do, we old users.

You're playing a concert in London's Union Chapel October 29th. What can the audience expect from the show?

'Frizzi 2 Fulci' can be said to have been born right there, at the Union Chapel, three years ago. What I want to bring back to that magical place is the satisfaction of these three years, the story of a project that was born, grew, diversified. A kind of birthday party. Lucio Fulci was my traveling companion; thanks to him and to our cooperation and friendship, I find myself around the world not only to tell a personal story, but a bit of the history of our beloved Italian cinema, which has been part of my country's good culture. A way to exchange feelings, passion, emotions, in the name of a noble art called cinema. 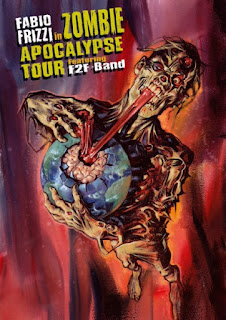