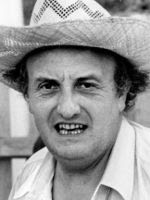 French director and TV host Peter Tchernia died October 8th in Paris. Pierre Tchernia appeared in  his first film in 1961 with the comedy “La Belle American” co-directed it with Robert Dhéry.  His most famous film: “The Annuity” with Michel Serrault, Michel Galabru and Claude Brasseur. He appeared again with Serrault, Galabru, Charles Denner and Jean Carmet two years later in “The Gaspards”. He was als a writer on multiple film adaptations of the adventures of Asterix, such as: “Asterix and Cleopatra” or “The Twelve Tasks of Asterix”. Tchernia was also a TV pioneer and hosted for ten years the show ‘Mr. Cinema’. Born in Paris on January 29, 1928 and was a writer on “Lucky Luke: Daisy Town” (1971) and “Lucky Luke: Ballad of the Daltons” (1978). In 1994 he helped script “Asterix in America” and was the French narrator in the film.
Posted by Tom B. at 9:22 AM