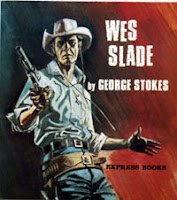 Wes Slade Deputy Marshal in Old Wild West. A lawman who travelled the West fighting crime and injustice. He was created by Canadian author George Stokes and first appeared in Il Magnifico West #5 - Lo Sceriffo Slade. In all 19 issues were issued and the newspaper strip ran from approximately 1961 till sometime in 1980 in the Sunday Express. The comic was translated and reprinted in comic books throughout Europe. Stokes was the brother of comic artist John Stokes.

George Stokes was a comics artist originally from Canada, best known for the Western strip Wes Slade in the Sunday Express, which he drew (and, originally, wrote) from 29th January 1961 to 1980 (the later instalments were written by Jim Edgar from 1979, while Harry Bishop succeeded Stokes as artist in 1980). Stokes also worked for IPC and, in the early 1950s, for Mick Anglo's studio. He died when he was only 47 years-old.

Jim Edgar was born Thomas Eric Edgar on 29th August 1908 in Newton Le Willows. He lived in Kettering started out as a short story writer and author of radio plays before turning to writing newspaper strips on the advice of Peter O'Donnell. I've only managed to trace the titles of two radio plays: Murder Case (1953) and The Fielding Case (1956), both broadcast on the BBC Home Service's Saturday Night Theatre.

Jim Edgar spent 22 years as the author of 'Matt Marriott' for the London Evening News (1955-77), drawn by the incomparable Tony Weare. He also wrote other Westerns including 'Wes Slade' for the Sunday Express drawn by George Stokes. Apparently Stokes wrote the early episodes of 'Wes Slade' himself before handing over to Edgar - who was credited from 1979 - and the strip was taken over by Harry Bishop in 1980-81. Harry Bishop was also the writer and artist of 'Gun Law' which ran in the Daily Express from 1960. Presumably Jim Edgar took over the writing at some point.

We're on firmer ground with Garth from the Daily Mirror as this has been well covered. Jim Edgar took over writing the strip from Peter O'Donnell in April 1966 and was the regular writer until September 1985, then wrote irregularly between 1985 and 1992.

Edgar had a serial in Tiger, 'Rusty Flynn -- Rodeo Roughrider', which ran between December 1956 and April 1957. He was a fairly prolific scriptwriter for the war libraries between 1962 and 1965, and seems to have stopped writing them around the time he took over writing Garth.

After the death of his wife Jessie in 1994 Edgar went to live in a residential home in Sleights, Whitby where he died on July 4, 1998.