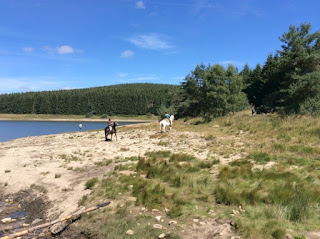 "The Porter Brothers": a western made in Auvergne

It tackles a genre usually neglected by film students. To complete his film studies at the London Film School, Wilhelm Kuhn decided to make a western. An average 40-minute film in English in the tradition of the spaghetti western and shot entirely in the Puy-de-Dôme because the Auvergne looks like a Wild West.

A western in English in Auvergne, was a daring challenge taken by Wilhelm Kuhn, French student at the London Film School, for his graduation film, "The Porter Brothers", he chose to combine his passion for westerns with his love of the Auvergne countryside.

Kuhn chose to follow the paths of his childhood in the Ance Valley, including Lake Pradeaux and Montpeloux crater with its magnificent columnar basalt.

Places that give the image and the illusion of really being in the American West, on the border between Canada and the U.S. where the action takes place. The result has impressed the American and Canadian friends of the young director who felt they recognized the familiar landscapes.

Synopsis:
A pastor and his daughter are in pursuit of two men who killed the wife of the latter: the so-called "Porter Brothers" are wanted dead or alive. While in ambushing them, they capture the younger of on of the two Sam and they soon realize that the real culprit lies elsewhere. What to do with their captive?

Auvergne inspires, and which extended the Wild West but also the heritage which offer numerous cinematic possibilities. While Wilhelm is already thinking about his next film, and has begun the trails in the area. The action will take place this time in the Middle Ages