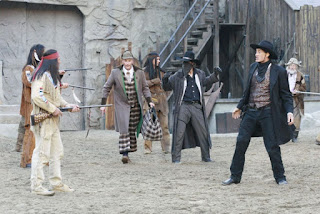 Diamonds! The greed for the sparkling stones drives dubious riffraff into the mountains a place where the small community of Helldorf is located. Father Hillmann and the inhabitants live in great danger. Old Shatterhand and Winnetou come to the rescue of the settlers, they have to fight with her old friend Sam Hawken an Indian raid on a railway line. In addition, they meet the murderer Santer, who once killed the father and sister of Winnetou who the blood bothers have pursued in vain for years. As the men and women from Helldorf fall into Indian captivity, Winnetou and Old Shatterhand launch an attack to free the prisoners - despite the gloomy forebodings of death. Winnetou fulfills his destiny at the foot of Mount Hancock.