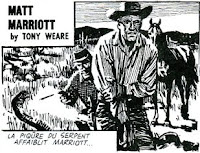 The story opens in Kansas in the late 1880's as cattlemen intend to drive their cattle herds across land that is settled by farmers. Matt Marriott is a young man living with his farmer parents with a neighboring farm settled by the Horn brothers. When the cattle are driven through, Matt's parents are killed defending their farm and Matt takes up his guns in anger for the first time. Coached by his friend Luke "Powder" Horn, he confronts the cattleman responsible for the death of his parents.

After the dust settles, Matt and Powder begin their travels that will keep them moving for the next 20 years until the strip ended in 1977.

Matt Marriott began on 19 September 1955 in the London Evening News and ran until 1977. Artwork was by Tony Weare with scripts by Jim Edgar.

There has been much consternation amongst strip collectors as the original stories were never titled and each adventure starts its numbering from No. 1. The very first story has become known as Vengeance Trail and has been reprinted in a condensed form in the Knockout Comic in 1961 and later as booklet 18 in the Archive Adventures series. However, Weare kept scrapbooks where he placed each strip as they appeared in the newspaper and he gave each a title - these have been used to identify many of the strips.

Tony Weare was born on January 1, 1912 in Wincanton, Somerset, England. Weare studied drawing at the Bournemouth School of Art but became a trooper in a cavalry regiment and where he developed a love of horses. Tony was a first rate artist whose best work is seen in Matt Marriott. He also worked for Mickey Mouse Weekly (Pride of the Circus: 1950, Billy Brave: 1950-54) and Comet (Greyfriars Ghost: 1952), and in 1980 drew the strip Rookwood by Harrison Ainsworth for Look and Learn.

Matt Marriott is considered to be one of the finest western adventure strips ever produced. The final story in the series was completed after Weare's death by Gun Law artist Harry Bishop. Weare died on December 12, 1994 in Porthleven, Coventry, England.

Jim Edgar was born Thomas Eric Edgar on August 29, 1908 in Newton Le Willows, Merseyside, England. He started out as a short story writer and author of radio plays before turning to writing newspaper strips on the advice of Peter O'Donnell. Two of his radio plays were Murder Case (1953) and The Fielding Case (1956), both broadcast on the BBC Home Service's Saturday Night Theatre.

Edgar then spent 22 years as the author of 'Matt Marriott' for the London Evening News (1955-77), drawn by the incomparable Tony Weare. He also wrote other Westerns including 'Wes Slade' for the Sunday Express drawn by George Stokes. Apparently Stokes wrote the early episodes of 'Wes Slade' himself before handing over to Edgar - who was credited from 1979 - and the strip was taken over by Harry Bishop in 1980-81. Harry Bishop was also the writer and artist of 'Gun Law' which ran in the Daily Express from 1960. Presumably Jim Edgar took over the writing at some point. Edgar died in Sleights, Whitby, North Yorkshire, England. on July 4, 1998.
Posted by Tom B. at 5:37 AM