Who Are Those Guys? ~ Leonis Bronevoy 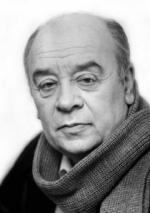 Leonid Sergeevich Bronevoy was born on December 17, 1928, in Kiev, Ukraine, Soviet Union . Bronevoy was very fond of music as a child and he was inspired by his grandfather, who was  a fiddler. He went on to study the violin at Kiev Conservatory School of Music, and he intended to join an orchestra and continue his playing. His father and uncle were high ranking officers in the secret service of NKVD in Kiev. One day his uncle was shot in his office by a person or persons unknown. His father was then arrested in 1937, and exiled for 10 years during the repressions known as the "Great Terror" under the dictatorship of Joseph Stalin. Leonid was a young 9-year-old boy, when he was separated from his father and with his mother, Bella Lvovna, were forcefully uprooted from their native city of Kiev and exiled to a remote town called Malmysh, in the Kirov region of Northern Russia. During the Second World War Bronevoy was evacuated in Uzbekistan. He was not allowed to enter any school because of the political prosecution of his father. However, his mother arranged for him to study acting at the Tashkent State Theatre Institute, from which he graduated in 1950 as an actor. He then went on to work on stage at many provincial theatres in such cities as Tashkent, Irkutsk, Orenburg, Voronezh, Grozny, and in other cities of the former Soviet Union. In 1953, after the death of Stalin, Bronevoy went to Moscow where he auditioned for the famous actor Aleksei Gribov and was admitted to the Acting School of the Moscow Art Theatre, from which he graduated in 1955 as an actor.

Bronevoy became an instant celebrity after his portrayal of the notorious Gestapo Boss 'Muller' in popular TV series ‘Semnadtsat mgnoveniy vesny’ (1973). Bronevoy and his partner in that film, Vyacheslav Tikhonov, became the talk of the Soviet Union. The amount of popular jokes about them and their characters in the film had soon exceeded those about Chapaev. Bronevoy's acting talent allowed him to overcome the drawback of his popularity in the character of 'Muller', the Gestapo Boss, whose image was stuck in the public perception of the actor. He demonstrated his range and his multifaceted talent as satirical, sarcastic, dramatic and even as a fine comic actor in more than 50 roles in film and on television. He worked with such notable film directors as Venyamin Dorman, Mark Zakharov, Anatoli Efros, Semyon Aranovich and others.

Bronevoy's worked with such stars as Aleksandr Abdulov, Oleg Basilashvili, Valentin Gaft, Rolan Bykov, Aleksandr Kalyagin, Georgi Zhzhyonov, Donatas Banionis, and other distinguished actors. From 1962-1988 he’s been working together with his film partner, Lev Durov, at the Moscow Theatre Na Maloi Bronnoi. Since 1988 he has been a permanent member of the troupe at the Moscow Lenkom Theatre under directorship of Mark Zakharov. Leonid Bronevoy's stage career spans almost 60 years and lists over 150 stage works in several theatre companies of the former Soviet Union. He was awarded and decorated by the governments of the USSR and Russia. He was honored with titles of People's Actor of Russia and People's Actor of the USSR. He also made successful international concert tours in many countries.

Today Leonid Bronevoy is currently residing and working in Moscow.