The Treasure of Fajardo


The actor wants to donate his memories "the people of Almería" 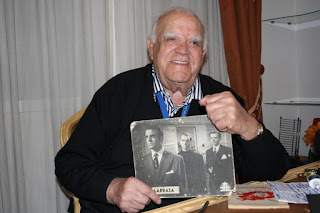 The day before turning 92 years-old, actor Eduardo Fajardo decided it was time to reveal the secret that had been saving for months. -a Dream- an idea that he would make known among his friends as part of a lecture for 'Celia Viñas' Cultural Association which works for some time: his desire to donate his memoiors to, "the people of Almería", in a gesture of affection to those who have been his neighbors for over two decades. A place that began to captivate him when he discovered, thanks to the movies, and has ended up conquering irreparably. "I've always dreamed of returning to my land [the Galician town of Pontevedra Mosteiro] but now less and less. Spend as loves: you're casting without realizing it and want to end at the latest place because it is what fills you up more. Almeria, you have to live here to love her, and to me it has won me over, he explains.

The project, unveiled last Saturday, is in a very early stage although it has moved thanks to Gabriel Amat, president of the council, which has offered his cooperation. Yes, Fajardo stresses that he is not "political" and only wants the institution to act as overseer of his legacy. "The owners are the citizens of Almeria and thus must contain a notary," he says resounding.

More than fifty trophies and awards that attest to six decades in the profession - photographs of his career in his filmography of over two hundred titles-screen images together with local authorities and celebrities, artwork, china, terracotta figures and Carrara marble ... a lifetime of objects that are now in Mexico, where he lived twelve years and where his family resides and who wants to bring them to Almeria. "All this will be part of the Museum Eduardo Fajardo, the first step of something that will later be much more linked with the films he made in Spain," he said without disclosing further details.

He knows that the idea of ​​giving his past to Almeria has a lot of romance. It not in vain he is considered a dreamer, an adjective that wants to take it with you when you leave this world. "When I have to go I'll let my tombstone manager say: This sparked a dreamer". For it was in Almeria, where he settled when he retired, he developed what he considered the best role of his career: the creation of the first theater group in Spain formed by people with disabilities.

"There is no actor who has done what I've done for them" he says. And reminisces how he was able to launch five works in the seven years in which he headed the theater group without barriers.

"We started with a work of the brothers Alvarez Quintero and was very successful. He filled them with enthusiasm, made them believe that what we did was easier than it really was, "He says he’s proud to have lit a torch that others continue today.”

An injury caused by a fall from riding a horse on one of his films has reduced his mobility today. "When I see a disabled person now, I see myself," he confesses with his resounding voice and that "northern seriousness" as he defines it, he found his back in the spontaneity of an Almeriense character.

One of the great villains of the western cinema shot in Spain (among dozens of titles still are reminded that he appeared in 'Django' in 1966 with Franco Nero) was the first smile that lit up the Walk of Stars of the capital as his name opened a path that now includes the names, for example of, Ridley Scott, Max von Sydow and Angela Molina. "I love this place where people give you open arms. It's true what they say you never feel like a stranger. So I will do everything I can on behalf of Almería". A love unrequited well worth preserving in a museum.

A cry against the "thick walls"

The tribute received by the 'Celia Viñas' Cultural Association on Saturday August 13, where the organization gave the actor a plaque after his lecture, has reminded Eduardo Fajardo of other recognitions he has received in Mexico in the mid-1960s. "I worked a lot there, I had great affection. A group of Spanish exiles wanted to represent 'The Mayor of Zalamea' for President of the Republic, as Mexico did not recognize the Franco government. I told them I would be happy for him but would not have a gesture against my countrymen. Far from bringing me problems, as they warned me, it gave me a little aura of honesty and integrity. Later, the Mexican government honored me with Ignacio Comonfort medal at the Presidential Palace. And there I shouted 'Viva Mexico!' And 'Long live Spain!'. It was a cry to overthrow a problem with thick walls. "