We continue our search for the filming locations for “Bullets Don’t Argue”. Crossing the desert George and Sheriff Garrett come across a ghost town. George is delirious and thinks they are in a real town. He goes to the saloon for a drink and finds nothing but empty bottles and dust. Clanton spots a well and runs to it pulling up a bucket of dirt and scorpions. Suddenly Santero and his men open fire on them. They run to a nearby mine for protection.

This scene was shot at what’s called Poblados del Oeste, the western set in Colmenar Viejo, Spain. It’s now a cow pasture with only some foundations and crumbling bits of bricks which were once walls of the impressive town. 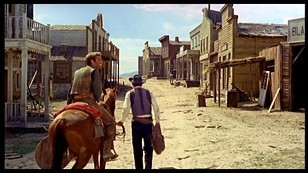