The Tabernas Desert, a dream factory in Almeria

If you talk Tabernas Desert in the province of Almeria, we refer to a true natural relic, a real scenic gem that we still have in Europe. Located in the town of Tabernas, this desert is the only one in Europe, with all the oddities that this represents with regard to fauna, flora or geological peculiarities. However, in Spain there are other deserts, with all kinds of forms, wildlife inhabiting them that is interesting to discover.

What today is a desert for centuries was an old sea basin. Although it may seem difficult, the Mediterranean waters bathed the land more than two million years ago. Even studies even claim that came to dive to 500 meters below sea level. One way or another this feature has been the one that has resulted in the landscape today presents the desert.

Like any other desert oases they are part of the landscape, being in charge of becoming the sole power source for much of the birds that live in this area.

History of the Tabernas Desert 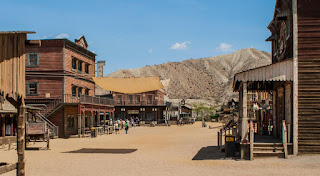 Because of its location and geographical conditions, this area of ​​Almeria receives annually more than 3,000 hours of light, making it one of the brightest of the peninsula. In addition the range of temperatures recorded in this area is between -5 and 48 degrees. As for precipitation, the Tabernas Desert usually no more than 200 millimeters per year.

Despite being one of the most important Western film shooting scenarios, one of the peculiarities of this area is that it is classified as Special Protection for Birds. Species such as the Alpine Swift, Blue Rock Thrush or the jackdaw live here have been responsible for that has been named with this mention.

Movies filmed in the desert of Tabernas

It was the mid-twentieth century when Hollywood stared at the Tabernas Desert to become the scene of many Western movies. By the terms of the landscape, light and color of the dunes, was the ideal to simulate spaces like North Africa or the western United States place. In fact, film names like Indiana Jones or Lawrence of Arabia were filmed productions here. Also the Italian director Sergio Leone, landed in this Andalusian land to direct such films as A Fistful of Dollars, The Good, the Bad and the Ugly and A Fistful of Dollars.

Attractions in the Tabernas Desert 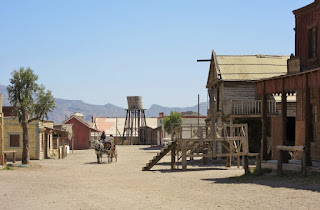 Precisely this film industry has become one of the main reasons as a tourist attraction. So one of the most interesting things to do it is to participate in the Road Leone Spielberg. With it, tourists can venture into all kinds of landscapes where the mountains blend with the crystal clear water of Cabo de Gata. This route also shows tourists all rabbits that were brewing in the shooting of films.

It is certainly a very interesting to know the secrets of this land option, curiosities and above all look more closely at those landscapes that were the scene of blockbusters and yet are closer to us than we think.

The Oasys Theme Park is one of the proposals that has the Desert. Divided into two parts, on the one hand much of the sets that were part of the American films are preserved. On the other hand there is a small animal reserve of large dimensions by walking while enjoying the wildlife and landscapes that surround it.