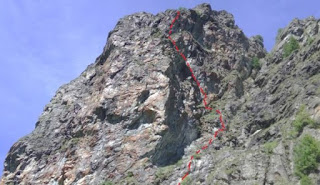 A new climbing route in Valle d’Aosta was opened and called "Spaghetti Western" and dedicated to the recently deceased actor Bud Spencer.

On July 13, in the mountains of Valtournenche, Italy was inaugurated a new way of climbing the rather with the unusual name. The men of the mountain rescue service of the Financial Police, in fact, decided to baptize it "Spaghetti Western" a new path to climb on Paretone Singlin which they discovered and opened. It is a small but significant tribute to the actor Carlo Pedersoli, aka Bud Spencer, who died June 27 at age 86, leaving a great void in the world of Italian popular cinema.

As luck would have it the trail, opened after five days of restoration and cleaning, it was "born" in the period around the time of the actor's passing and that its discoverers were, fans of Bud Spencer and of his famous series of "Spaghetti Western" films in the 1960s and 1970s, such as "They Call Me Trinity ...".

We are talking about a multi-pitch route, many more pitches. The route is deserving especially from the aesthetic point of view and one of its biggest assets is the particular location on the sun already in the early morning hours; in detail it spreads over 160 meters, 5 lengths and 47 bolts including stops. 6a and 6b are the levels of difficulty of the trail, which is located to the right of Paretone and is of medium difficulty. The basic materials are to repel down a rope from 70 meters and 12 referrals.
Posted by Tom B. at 5:54 AM