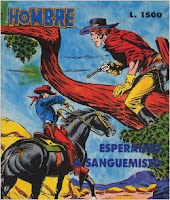 Hombre was a western comic book series produced by Tutti Diritti, written and drawn by artist Pini Segna of Zagor fame. Also Amos Zaccara wrote some of the stories of this seeker of justice in the American West. The comic book was published in 1966-1968. 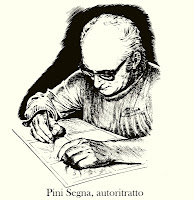 Born in Florence, Italy on October 22, 1925, Pini Segna graduated at the Academy of Fine Arts in 1944. In 1946, he debuted with the Vincenzo Baggioli scripted 'Agente K6', followed by 'Il Giustiziere Mascherato', for the publishing house Nuova Aurora. In the following year, for Editoriale Sportiva, he made 'Penna Azzurra'. From 1948 he worked as an illustrator of 'Saetta' and 'Volpe' stories for Alpe, and as a collaborator of Arc publications like 'Pantera Bionda', 'Tom Mix' and 'Tom Bill'.
In 1949, he began to work for the Albi dell'Intrepido collection. In the early 1950s, he drew series like 'Dix', 'Tornado Bill', 'Carabina Jones' and 'Gim Falco' for Marino Tomasina Editore, and in the late 1950s, he made 'Dick Montana', 'Gill Bart', 'Glory Men', 'Giungla Kid' and 'Dakota'. Between 1965 and 1977, he was mainly active as an illustrator of 'Mandrake', 'L'Uomo Mascherato' and 'Kriminal stories for Editoriale Corno, as well as 'Akim' for Editions Aventures et Voyages. From 1977 to 1982, he illustrated various stories of  'Zagor' for Daim Press.