In watching “Bullets Don’t Argue” (1964) with Rod Cameron, Horst Frank and Viv Bach, Viv plays Agnes Goddard who Cameron as Pat Garrett befriends her and her brother. Later in the film Pat is escorting George Clanton back to Texas to face trial for bank robbery. After crossing the Valley of Death they come upon the Goddard Ranch and stop to rest and get some water and food. During the stay Rod sees a picture of a couple on the wall and Agnes Goddard tells him they are her parents. The picture is really the famous photo of The Sundance Kid and Etta Place taken in New York City before their boat trip to Bolivia. 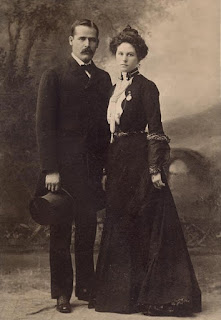