Who Are Those Guys? - Ulrich Bruckner 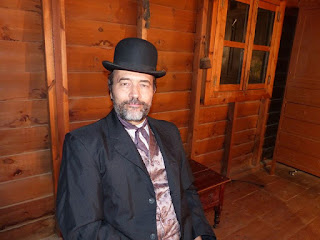 Ulrich P. Bruckner was born in Innsbruck, Tyrol, Austria on March 28, 1962. Ulrich’s been a Spaghetti western fan since discovering  Sergio Leone in the 1970s. He went to college at Leopold-Franzens-Universität Innsbruck and then attended A. B. Freeman School of Business at Tulane Univesity. He went to work at Koch media and films and was able to convince them to let him release a number of Spaghetti western films on DVD. The films had excellent reproductive qualities and features such as original trailers and interviews. Bruckner than went to work for Sony Pictures Home Entertainment GSA and now President at Explosive-Media. Ulrich has also wrote a history of European westerns Für ein paar Leichen mehr (2002) and revised edition in 2006. Ulrich travelled to Spain several times to visit the Leone and other Euro-western locations and then on to Italy to interview some of the stars of the genre including Giuliano Gemma, Gianni Garko and George Hilton.

Ulrich’s also appeared in a few Euro-westerns when the genre was revitalized in the second decade of 2000. His roles are cameos but are a well-deserved nod to one of the genre’s biggest fans, supporters who has been able to bring many of the films to an audience who would have never been able to see them.