50th Anniversary of the premier of “The Halfbreed”

Winnetou rescues young Happy when he climbs into an eagle's nest to get an eagle feather for the birthday of his sister Apanatschi and is attacked by the eagle.  Apanatschi the daughter of Farmers Mac Haller and his wife the Apache Indian Mine-Yota, is a half-breed.  However, this is not an obstacle for the impetuous young Jeff Brown, he wants to marry her.

Mac Haller leads Winnetou and Apanatschi to a vein of gold, which he is giving her for her birthday.  However Apanatschi is not excited particularly because she knows that gold only brings misfortune. And indeed, the two trappers Pinky and Sloan out to find the gold source murder Mac Haller, as he refuses to betray the specific location. Apanatschi and Happy escaped only because Old Shatterhand intervened just in time. The two are brought to the safety of the railway Camp for the Transcontinental Railroad (TCRR), and Old Shatterhand rides on to Rocky Town where bandits led by Curly Bill are creating mischief.

Curly Bill has learned from Pinky and Sloan that Apanatschi knows the specific location of the gold, and leads his bandits on a raid of the railroad stock.  They kidnap Apanatschi and Happy in their refuge in a seedy saloon. Jeff to sneak into join the gang and briefly gains the trust of the bandits.  Through a trick he obtains the key for the room where Apanatschi and Happy are held, and with the help of the landlady Bessy they escape through an underground passage.  Apanatschi is taken to the Kiowa Indians for her safety.

Old Shatterhand has now mobilized the railway workers, and together with Winnetou attacks the bandits attacked in there saloon in Rocky Town. However, some of the gang manage to escape.  Curly Bill wants to kidnap Apanatschi again, but he only manages to grab Happy. Winnetou trades the hostage by bringing the bandits to the location of the gold. Curly Bill then sets Winnetou and Happy free but his lieutenant Judge is not satisfied.  He just shoots his boss and makes himself the new leader. 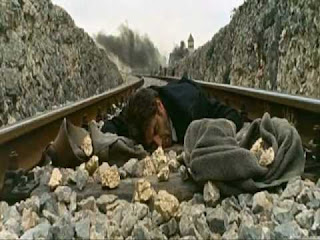 The bandits load their horses with all the gold they can get their hands on and are on their way back to Rocky Town, where they find waiting for them Old Shatterhand and the railway workers.  They have a tunnel under the city filled with dynamite, and upon the arrival of the bandits everything is blown up. On his escape Judge is run over by a locomotive, and the rest of the gang are killed by the Kiowas under leadership of Winnetous.  Apanatschi gives the remaining residents of Rocky Town gold for the reconstruction of the town and moves in with Jeff at the old log house of her late father. 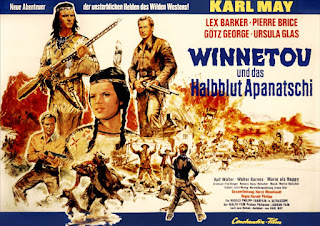