Unseen footage from The Good, the Bad, and the Ugly: PART 2

The movies by Sergio Leone show from a technical and editorial point of view an undeniable “author’s” mark.

The analysis of the material, the negatives, copies, duplicates and the various editions, the documents and the statements by friends and collaborators, all clearly reveal an image of a true artist and craftsman, an all-round movie man with a unique love for his job and with an enormous competence, an author who followed his movies by himself step by step, of course having extremely valid collaborators on his side like Luciano Vincenzoni, Nino Baragli, Tonino Delli Colli, from the story to the screenplay, editing, and cutting the final product, either extending or reducing it for the foreign markets.

Whoever deals with the restoration of the Leone movies, finds himself having to deal constantly with a considerable number of variations, all called “by the author”; it was quite normal that Leone until the very last minute before the premiere, would work personally on the copy of the film ready for the release, by cutting and editing first hand, even anticipating the censors or the demands of the market.

To all this, one has to add, like always, that a great number of sources (more or less respected) would report different figures concerning the length, censor cuts, unedited material etc., and in many cases they were second hand reports or hearsay. Considering all this, one can understand the complexity of a preliminary work of research in order to obtain a reliable end result. Not to mention the technical problems.

Il Buono, il Brutto, il Cattivo is no exception, as we will see.

From many different sources on Leone films, the length of Il Buono, il Brutto, il Cattivo (the original Italian version) varies from 180’ to 182’ (let’s keep in mind that according to various sources, for the different dubbed versions for the foreign markets, the length is stated as 166’ for France, 161’ for USA, 148’ for U.K.).

We do not know exactly from which sources the length of the Italian edition is determined; certainly not from the length indicated in the censor’s approval dated 20th December 1966 which states 4.840 meters equivalent to 176’54”. This figure, lacking a proper measurement done on the actual copies (or on the VHS tapes, provided they have not been cut and keeping in mind to recalculate the length obtained with 25 frames per second into 24 frames per second) is still the only “official” source, but it is not always reliable.

Very often some heavy discrepancies (reduced or increased length) have been reported, often simply because the meters for the censors had been calculated including the closing credits or sometimes even by a rough guesstimate.

In the case of the Leone movie however, this length is quite close to the copy acquired in 1970 and still owned by the Cineteca Nazionale (4.832,80 meters or 176’39”), which includes the subsequent “lightening cuts” of 3363 frames which will be referred to further on and which is missing however a few frames due to wear.

From a comparative examination of the different materials – as can be seen on the enclosed appendix/table – one can see that there are no substantial differences in the various materials, but only slight differences due to different ways of measuring, roundings, usage of different conversion tables meters/minutes and slight discrepancies in the seconds/frames.

We can therefore consider the figures of 180’ or 182’ as wrong (maybe, but it is not known on which sources this is based upon, it included two scenes which had been shot but never used for the movie, which we will talk about later on).

In order to establish the correct length of the film to restore, we think it is the correct choice to use the Cineteca Nazionale copy, the existing negatives, the intermediate material and also the length declared by the censors.

A further problem however arises from the 1969 re-edition, which according to the figures in the “Cinematographic Review” shows a cut of 540 meters, whereas the copy kept at the Cineteca
Nazionale (where it was deposited at the time, like many other films, by those ministerial offices) shows cuts of only 346 meters. Was it just a banal transcription error, “5” instead of “3”?

The only solution is to let the existing material “talk”.

The first element to take into consideration is the positive copy, the only one existing since 1970 at the archives of the Cineteca Nazionale, where since 1965 a copy of all Italian movies had to be sent for safekeeping.

This is a copy, printed in Technicolor, of rather poor color quality (most probably being one of the very first copies printed before the release), but which has the merit of being one of the longest copies among those preserved.

The film was finished and screened for the first time on 23rd December 1966. In those days, the film critics were far from appreciating Leone’s films, underlining, since the release of Fistful of Dollars, the excessive violence in his movies. So certainly this influenced Leone’s choice, as stated verbally by some of his collaborators, to make some small cuts until the very last minute on the movie ready to be screened for the first time.

They were mainly concentrated on reel 6A (the eleventh), the beating scene of Tuco (Eli Wallach) by Corporal Wallace (Mario Brega), by orders of Sentenza (Lee van Cleef). The scene was cut by 2.876 frames, equal to roughly 2 minutes, eliminating the most violent scenes. 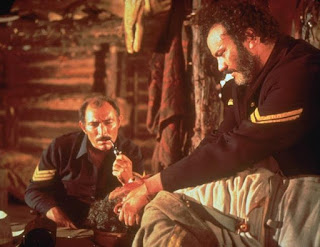 At the same time, as an intelligent and evident narrative choice, Leone decided to shorten slightly the scenes which alternate the beating, the ones showing the prisoners forced to sing in order to cover the cries of the poor victim.

A further very short cut, 487 frames or about 20 seconds, was made in the final sequence when Tuco was left standing on the cross by Blondie with the noose around his neck.

All these cuts, and this is an unique occurrence in the history of this movie, have been reproduced on the original negative, substituting the 3.363 frames which had been cut with the same number of transparent frames in order not to lose the original length and the synchrony with the soundtrack.

30 years later, when Metro Goldwyn Meyer started to work on a complete version of a video to be distributed in the States (the version distributed up to then was 15 minutes shorter) they realized they received from Italy a copy obtained from the original negative, with approx. 2 minutes of black frames, but with an intact soundtrack.

In the fall of 1999, MGM knowing that the Cineteca Nazionale owned a presumably integral copy of the movie, asked for permission to check it. Thanks to this exchange of information with MGM, the first idea of a restoration project was born, which during the successive months was defined and completed by the Cineteca Nazionale, with the decisive and crucial collaboration and contribution by Alberto Grimaldi Productions and by the Leone family.

It was then discovered that the copy owned by the Cineteca Nazionale in fact has no cuts and includes the missing 3.363 frames as described above, the ones that had disappeared from on the negative.

Concerning these cuts, it was however decided not to include them in the restored version, but in any case they have been duplicated and preserved, since they are regarded as a document; in fact, these cuts have been deemed to be choices of expression made by the author, confirmed by the painstaking deletion on the negative.