We continue our search for the filming locations for “Bullets Don’t Argue”. After leaving Ramon’s hacienda Garret and George and Billy Clanton begin their trek through the Valley of Death. At first it is a dry desert canyon area but they must stop because of George’s injured arm. Garrett lets them dismount and rest in a gully by the side of the road.

This scene was filmed in Pechina Sierra Alhamilla where the scene where Garret first meets Mike and Agnes Goddard. The location was also used in "The Avenger" aka "Texas, Adios". 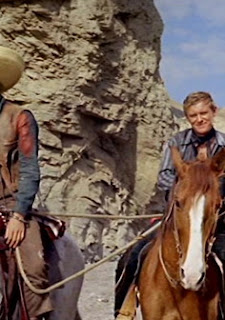