As had already been the case for the legendary Collana Rodeo in the Seventies, TuttoWest was also an anthology, created so that some of the most celebrated "Bonellian" heroes of the Fifties and Sixties could be presented to the younger generation (as well as being refreshed in the minds of the faithful readers for whom, in the past, they had already become familiar and much-loved figures). TuttoWest, as Sergio Bonelli wrote in one of the columns where he answered his readers' letters, "will be a door thrown open wide into the world of adventure, and a way to bring the "golden years" of Italian comics back to life today. Characterized then as now by the "epoch-making" signature of G. L. Bonelli, TuttoWest will give you a chance to make the acquaintance of virtually all of his extra-Tex production…". Delving into this almost inexhaustible goldmine of inventions and imagination, the forty-five issues of TuttoWest rediscovered several unforgettable little gems (Hondo, Il Cavaliere del Texas, El Kid, Kociss…), which were followed by equally important "period" mini-series such as "Gordon Jim" and "La Pattuglia dei Bufali" by Roy D'Amy, and "Il Giudice Bean", with a script by the still young Guido Nolitta. Plus one novelty: the brief saga of River Bill, an amusing fresh-water sailor, begun by Nolitta and then completed by Mauro Boselli, with artwork by the venerable Francesco Gamba. 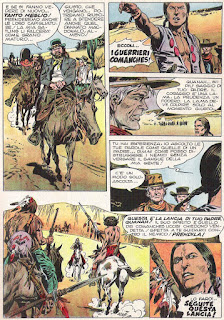 Guido Nolitta was born in Milan, Italy on December, 02,1932) A child of art: his father, Gianluigi Bonelli, is one of the 'founders' of Italian comics, and one of its most valuable authors; his mother, Tea Bonelli, was a pioneer of' children's publishing. Still very young he attended the craft editors Audace, getting familiar with all the different aspects of the "trade." in 1957, at only twenty-five, he takes over the family business direction, the Herald editions. the year after writing a BOY IN THE FAR WEST, designed by Franco Bignotti, published in Frontier and reprinted several times. This is followed by JUDGE BEAN, realized graphically by Sergio Tarquinio in 1959 but published only in 1963 in the series of Albi the Cow Boy. The signature that appears in the title of the books it is not Sergio Bonelli, but Guido Nolitta, not his real name, used by chance. This is a very clear choice desired by those who, with a lot of honesty and sincerity, it is considered an amateur in authorship, but is considered more properly at ease in publishing entrepreneur robes. In 1961 he created ZAGOR, designed by Gallienus Ferri. The stories written by Nolitta, while easily inserted in the vein of classic adventure fiction, often and willingly enrich a certain light-hearted tone that then turns into a constant of all the characters he has created, to become the distinctive feature of MISTER NO, published in 1975 with the designs of Gallienus Ferri and Franco Donatelli in the first two episodes, but then definitively characterized by Roberto Diso. However even in this case Bonelli leaves, perhaps more reluctantly than others, the task of writing different stories to such good employees as Castelli, Nizzi, Sclavi and Ongaro. It's like an author getaway that is within him to better find himself in that of a publisher, who in over thirty years of activity has given to the Italian readers the opportunity to read stories of timeless heroes like TEX WILLER or decidedly innovators like KEN PARKER , MARTIN MYSTÈRE, DYLAN DOG, NICK RAIDER and NATHAN NEVER. But even small publishing jewelry, such as necklace Protagonists (1974-75), by Gino D'Antonio the TALES OF THE WEST series, or the prestigious volumes of A Man an Adventure, real training of international talent. It is in this series that in 1977 Bonelli Nolitta-wrote the screenplay of "The 'Man in Texas", designed by Aurelio Galleppini. Without signing them he also writes numerous stories for TEX.

Born in La Spezia October 15, 1926, Francesco Gamba began his career in 1947 with Edizioni Alpe. He then worked for Casarotti, drawing various episodes of "Yorga" (text by G. L. Bonelli), and for the Mondadori ("Pecos Bill", 1950-1954). In 1956, he begins to collaborate with Edizioni Audace Tea Bonelli; it is the period of Terry, Yado, and Rocky Star, the first two series of Gianluigi Bonelli, the last written by Andrea Lavezzolo. In 1958, it was his turn at Il Piccolo Ranger, whose commitment Gamba will focus on for over twenty years. He also collaborates, in the meantime, on Zagor and, more sporadically, Tex. He also produced some episodes of River Bill and specials dedicated to funny Mexican parody of the Spirit with the Hatchet, the steel Cico. Gamba died in Milan, Italy on February 13, 2012.
Posted by Tom B. at 6:28 AM