The normally adult-natured adventures of Djustine involve her facing supernatural creatures (such as werewolves, zombies and demonic beings). All the stories take place in a strange, gothic western world of the 1880s.

In the late 1990s the wild comic adventures of Djustine, a blond female gunslinger, were published as photocopies, sold only in Italy or through the mail to fans of supernatural western comics. Since 2003, Djustine has been regularly published in Italy on books by E.F.edizioni and on X-Comics magazine by Coniglio Editore and in the United States in the serie Djustine: Tales of the Twisted West by Carnal Comics.

The creator of Djustine, Enrico Teodorani, has also written for the superhero series Femforce, published by AC Comics in the USA, and is also the creator of Calavera and Wheela, both published in Italy by E.F.edizioni and in the US by Carnal Comics and Eros Comix. In 2011 he left the comic field and then in 2013 started writing hard-boiled novels set in Italy. 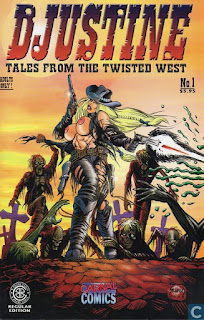 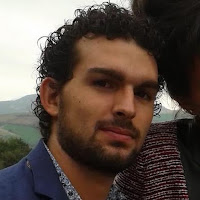 Enrico Teodorani was born in Forlì, Italy on May, 16, 1970. Enrico, from the mid-80s began working with several fanzines (Full Metal zine, Metal Thin (k) holy, Under Shout!, Color, Big, Dies Irae, Effort, etc. .), first as a columnist and reviewer, then, from the early ‘90s, even as a scriptwriter / director.  His character in comics has been more fortunate undoubtedly FALLEN ANGEL, created at the beginning of '93 together with his wife Francesca Paolucci and quickly became cult comic published several fanzines (currently his adventures are published regularly on every issue of Amazing Comics, Please let us Largo, Cardboard and Darkness Attack bubbles, and in most other fanzines will publish occasional episodes).

After you have edited the texts of the only comic book de 'THE COP' (legendary character of pocket for adults 80s, created by Renzo Barbieri & Sandro Angiolini) made ​​in the 90s (and published as an appendix to the first issue of reissue of the first episodes of the series out on newsstands this year under the title 'Sbirra' in Star S qualo Comics series), now Teodorani is working on the new horror series / western erotic Djustine (bizarre fusion between the gunman and DJANGO JUSTINE the Marquis De Sade), already noted publisher arthouse Glittering Images, which he mentioned about the volume reprint 'Marquis De Sade: Anthologie Illustree' by publishing a cartoon.