Spaghetti Western Trivia - The Man With No Name’s Rattlesnake Grips 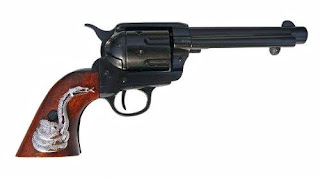 If you were a fan of the TV western Rawhide, which starred Eric Fleming as Trial Boss Gil Faver and a very young Clint Eastwood as ramrod Rowdy Yates, you should remember an episode where Rowdy acquired the Colt six-gun with the silver rattlesnakes on the grips. In the second episode, “Incident at Alabaster Plain,” which aired on Jan. 16, 1959, guest star Mark Richman played Mastic, a vicious killer who challenged Rowdy to a gunfight. Faver intervened but in the end Rowdy went after Mastic, who fled to the bell tower of a mission after robbing and murdering his stepfather. Faver yanked on the bell rope and the bell knocked Mystic out of the tower and he fell to his death. Faver retrieved Mastic’s Colt, which had the silver rattlesnakes on the grips, and gave it to Rowdy. Clint Eastwood used the snake-handled Colt, a 5.5-inch barrel .45 for the rest of the Rawhide series.

When Eastwood was hired by Sergio Leone to star in A Fistful of Dollars, he used the snake-handled Colt with his personal Andy Anderson custom Walk-and-Draw rig. He continued to use the snake-handled Colt in For A Few Dollars More. The sterling silver rattlesnakes, coiled and ready to strike, were supplied on the custom grips by Andy Anderson of the North Hollywood Gunfighter shop. It is unknown who crafted the original snakes, but they were definitely professionally made by a silversmith. 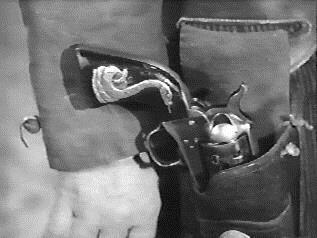