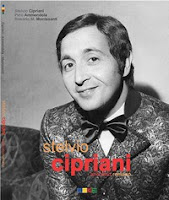 Teke Publishers continues, their series dedicated to a number of artists to justly pay homage, the rediscovery of textual and iconographic context of theater and film music.

An "anonymous" young man who in a few years was able to play the accordion and organ to perfection and that, when little more than a teenager, disentangled from his accountancy studies at the conservatory to satisfy the ambitions of both parents. Music lessons were received from a priest in exchange for excellent light wines of the family’s vintage, chance encounters and intelligently cultivated with esteemed figures of the musical world from Nino Rota to Teddy Reno (how many know that Cipriani was the accompanist when Rita Pavone auditioned ?);  creator, composer, arranger and orchestrator at the "last minute" of important soundtracks that in some cases "saved" these films remained lost in the history of Italian cinema, Stelvio Cipriani has been able to disclose his life, family and work, with ease, with acute rigor and determination in the study, which could still be heard as a side of player activity, affectionate to his Rome, playing with many famous colleagues of the show.

From his first musical training with the "Principles" that led him to play, newly-married, on a Caribbean cruise to profitable arrangement lessons with renowned pianist Dave Brubeck from which he learns and perfects the modern improvisational methods;  from the long association of the Music Publishing House LIVE that brings him to compose dozens of soundtracks including the police series of the 70's, to the sacred music that sees him even compose a Mass for John Paul II - which he himself considered the culmination of his entire career - and playing in his presence on several occasions, Stelvio Cipriani’s life is a delightful adventure full of anecdotes that make us reflect on society and how arguments have changed ways, habits and customs in the way to approach professionally a trade of so much difficulty and prestige. His writing is supplemented by private archive images and photographic materials from the various districts of the capital on a daily basis by the author, vintage posters and film shots, and an intriguing series of pencil drawings. The reading runs fast, offering a unique view of a large, determined and irreplaceable "Anonymous Roman".