El Coyote's real name is César de Echagüe and he is a rich man living at a ranch called San Antonio outside of Los Angeles. In Mallorqui's novels one can trace that César was born sometime between 1826 and 1830. The novels cover adventures from 1846 until circa 1875. César was inspired by a masked female actress and by the Zorro legend when he started operating as El Coyote in 1846. Coyote protects the original Spanish community of California from the Anglo Americans, and certainly all "bad ones", The novels comprise the years from December 1851 to around 1874, there are 120 original volumes plus 10 extras; plus at least 62 Nuevo Coyote - telling stories of pre-1851. Coyote had a black shirt (neither white nor blue or red - although the drawings show a white or blue shirt) ... and he wore gloves - the mask covered more of his upper face than shown on the fine drawings. He was born César de Echagüe in Los Angeles, which he left for Havana as a youngster (around 1845) and "officially" returned in December 1851 (although operating as Coyote in California several times before that). César's sister Beatriz was born 1833 - she married ex-Washington resident Edmond Greene (both knew of Césars double identities). After his first wife's - Leonore de Acevedo, born circa 1832 - death in 1857, when César Jr (nicknamed El Cuervo - The Raven - from 1873) was born, his father César (Coyote) left Los Angeles again, for several years, but returned in circa 1865 (although he secretly worked in America as Coyote after only a few years abroad). Guadelupe - Lupe/Lupita Martinez - later de Torres (in 1872), who became even much richer than César, was born circa 1835 and married César in 1870. Their child Leonorin was born in 1871 - and fosterchild Eduardito (Gomez de la Mata) also in 1871. Ricardo Yesares (Coyote's sub for many years from circa 1865) was born circa 1834. The Lugones brothers and the Indian woman Adelia helped Coyote from the very first beginning. Coyote's closest allied from 1865 was César's servant, the deaf Indian Matias Alberes. In later novels gunman Mario Lujan helped Coyote several times. From around 1873 the skilled Indian Pedro Bienvenido became Coyote's foremest allied and César's servant. 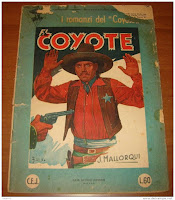 El Coyote had a comic book adaptation in Spain, by Jose Mallorquí and Francisco Batet, in the comic magazine Novelas del Oeste (Western Novels) during the 1940s and 1950's. 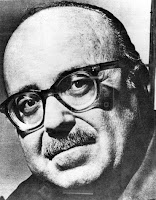 Jose Mallo Figuerola was a Spanish writer of serial novels, paperbacks, mainly westerns and the creator of the popular character of El Coyote, inspired by El Zorro.

Mallorquí he born in Barcelona, Spain on February 12, 1913.  His father left them even before Joseph was born so he was raised by his mother and grandmother.  Not being recognized by him, he would adopt the surname of his mother Mallorqui.

He studied at a boarding school until he was 14 years-old when he left school to start work.  However, he would enjoy a financially comfortable life for his mother, who died when Jose was only 18, he left a legacy enough so that he could lead a life very buoyant for quite some time.

He began working in Spain as a translator for the publishing company Molino. During the Spanish Civil War, the publisher moved to Buenos Aires, Argentina, but Jose Mallorquí continued to work for the company from Spain, not only as a translator, but also publishing his first novels with them. When the war ended, the Molino publishing returned to Spain, Mallorquí held various positions within the editorial.

In 1936 he married Leonor del Corral, after a courtship that included the opposition of her family. His son Caesar was born in 1953 and is the the same one that started working in radio serials writing numerous different themes that later published in book format.

In the early 60s he moved to Madrid, but his health was deteriorating rapidly.

In 1967 his wife was stricken Leukemia and died in 1971. Joseph Mallorquí never got over this trance and committed suicide the following year, on November 7, 1972, leaving a note apologizing to his son.

Although he also wrote biographies of Spanish conquistadors, detective, horror, fiction and dramas, Mallorquí most popular character was Caesar de Echagüe, known as El Coyote, and who starred in a total of 192 novels. 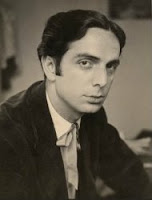 Francisco Batet Pellejero was born in Barcelona in 1921. He began his work in the comics field with small contributions to 'Cuentos Pilarin' (1942). Soon afterwards, he began doing cover and interior illustrations for popular novels, like 'Misterio', 'Novelas del Oeste' (1943), 'El Coyote' (1944), 'Cliper' (1945) and 'El Encapuchado'. In 1947, he started illustrating comics with 'El Coyote' for the magazine of the same name.

The comic about the famous Californian hero was based on the novels by José Mallorquí, and the magazine was one of Spain's most famous adventure magazines of the time. For the same publication, he illustrated 'El Corsario Azul'. In 1952, he left Barcelona and moved to Paris, where he spent the next decades illustrating for Hachette and France Dimanche.