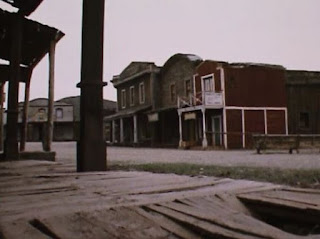 A large part of the Spaghetti Westerns were filmed in Spain, especially in the region of Almeria in Andalusia. The landscapes of the Almeria region have exceptional weather conditions, steppes and dunes, ravines and hills, canyons and America with its deserts similar to Arizona, Nevada and Colorado. A true Wild West world!

The area was discovered by André Cayatte in 1957 for the exteriors of his film “Eye for an Eye”. Therefore many spaghetti westerns were filmed in this place where everything is silence and desolation, a place without modernity without telegraph poles, desert. In 15 years more than 250 films were shot in this magical place.

This documentary presents some scenes of where films were shot, with waterfalls, where horses were trained to lie down and to "play dead", falls, fights and a lot of blood ... Unfortunately the western fashion is over at these shooting locations, these locations and sets were only recently abandoned, and only tourists still brought some life to this desert.

This story is a beautiful remembrance for all those who loved this kind of cinema, especially the Sergio Leone films with music by Ennio Moricone in For a Few Dollars More, The Good, the Bad and the Ugly, Once Upon a time in the West, Duck, You Sucker! ...

Documentary on filming westerns in Almeria featuring Lucio Fulci’s “Four of the Apocalypse”.