Terence Hill reacts to the passing of Bud Spencer 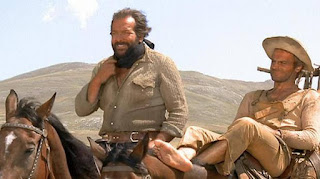 Terence Hill: “I am shocked,
I lost my best friend.”

Bud Spencer recalled: “I had to be paired with another actor that the night before filming he was hurt and so was we called Mario Giroltti. Fate. We never had a fight”.

I have lost my closest friend, I'm shocked ": Simply put, a lot of sadness. The salute to Bud Spencer by Terence Hill is at odds (how many times they appeared together) with irony and self-irony, ready wit and taste for paradox that were the figure of Bud Spencer’s life: "I never wanted to make the film". In fact, Bud hag done over 100 films: "I had bills to pay. They asked me: you ride a horse, you speak English, you've never grown a beard? I answered with three no. But he needed one with a physique like mine." He made a thousand works: "Except for the dancer and the jockey." Read Descartes: "But his" I think therefore I am "for me it is" I eat, therefore I live." I was actually a follower of all his philosophy: "Futtetinne". fregatene the Neapolitan version.

Terence Hill with a stainless report: "Bud was to be paired with another actor (Peter Martell) that the night before filming he was hurt and so was I was called. Fate. We are the only couple that had never quarreled. And just because there was no envy between us we became friends. To my difference, he had studied acting. I did not go to acting schools or academies. But in the end even a monkey learns to play. "In the movies the fat and the lean, clever and less clever, the mind and the arm. In life? "He's a pragmatist, I a Neapolitan Hooch. We discovered the comic westerns without knowing it. "We did not repent of anything, "I would do everything, my way which has always been a continuous search of the limit. I consider myself a top amateur." He also had a pilot's license: "We were shooting Stronger, guys! in Colombia. I watched the pilot and so then I tried to do that. " Already, even the monkeys can eventually learn.
Posted by Tom B. at 6:02 AM