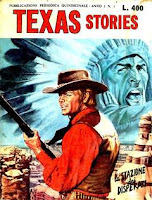 This series of comic books was based on no one particular hero but a different hero in each issue. Such characters as Buffalo Bill, Reno Kid and other western characters, real and fictitious.

Alberto Giolitti was born on  November 14, 1923 in Rome, Italy. His family owns one of the most famous cafés, Giolitti, where he also worked for a while. He debuted as an artist for Il Vittorioso in the late 1940s. After World War II, Giolitti moved to South America, where he worked for Editorial Lainez and Columba of Buenos Aires. After three years in there he was able to move to his original destination, the United States; there he became a mainstay of Western/Dell Publishing, penciling numerous characters, including Indian Chief, Tonto, Cisco Kid, Turok, and Gunsmoke.

After obtaining American citizenship, in 1960 he returned to Italy, from where he continued to collaborate with Western and other US and British publishers. The series he worked on in this period include Gold Key Comics' Star Trek. For the same company he drew a King Kong adaptation. In Rome he established a popular studio of comic artists called Studio Giolitti after himself.