Who Are Those Guys? - Romeo Bosetti 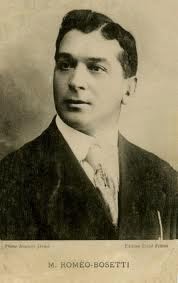 Roméo Joseph Bosetti was born in Chiari, Brescia, Italy on January 18, 1879. The son of circus artists Giovanni and Filomena Baresi, he began performing at the age of ten years in the circus of his parents.  He had a brother who died at age five, and a sister Henriette who was a dancer, before she died tragically after she jumped from a window to escape a fire.

Because of the continuous wandering of his parents, Bosetti, could not attend school , but taught himself the French language, thanks to the fact that their circus often made stops in French speaking countries.

Acrobat , stuntman and music hall artist, Bosetti made ​​his debut in front of the camera in 1906 for Pathé in “La course à la perruque”, where also in the cast was André Deed.  Subsequently he moved to Gaumont, where he acted, directed and wrote screenplay for the comic series Roméo from 1908 to 1914.  Also while working for Gaumont he was the producer of three films in the Fantômas series directed by Feuillade.

Bosetti launched other comic characters and directed them personally in more than 250 films shot up until 1916 .  The first was Calino starring Clément Mege, he then returned to Pathé in 1911 and directed for the Paris film studio, and the production of the comic Nizzi in “Comica Film”.

Forced to abandon the film business during the First World War, he participated in the war where he was wounded.  After the war Bosetti’s films were no longer in demand so he resorted to production and other tasks in the distributive sector of the industry