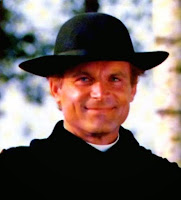 Don Matteo, produced by Lux Vide and Rai Fiction and broadcast on RAI 1, is a tremendously successful television series which was first aired in January 7, 2000. The series over the years has been appreciated all over the world, from France to Finland, from America to Australia. It begins its 15th year of filming next month.

The popular fiction broadcast on RAI 1, stars Terence Hill as the priest-detective, will begin shooting in Spoleto, Perugia, Italy on June 3 through June 27.
Posted by Tom B. at 7:17 AM