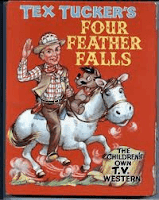 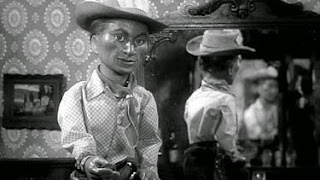 Sheriff Tex Tucker maintains peace in Four Feather Falls, Kansas with the aid of four magic feathers which allow his dog and horse to talk and his guns to swivel and fire automatically whenever he is danger.

Four Feather Falls was the third puppet TV show produced by Gerry Anderson for Granada Television. It was based on an idea by Barry Gray, who also wrote the show's music.[1] The series was the first to use an early version of Anderson's Supermarionation puppetry. Thirty-nine 13-minute episodes were produced, broadcast by Granada from February until November 1960. The setting is the late 19th-century fictional Kansas town of Four Feather Falls, where the hero of the series, Tex Tucker, is a sheriff. The four feathers of the title refers to four magical feathers given to Tex by the Indian chief Kalamakooya as a reward for saving his grandson: two allowed Tex's guns to swivel and fire without being touched whenever he was in danger, and two conferred the power of speech on Tex's horse and dog.

Tex's speaking voice was provided by Nicholas Parsons, and his singing voice by Michael Holliday.