The Almeria School of Art honors Leone with a group exhibition 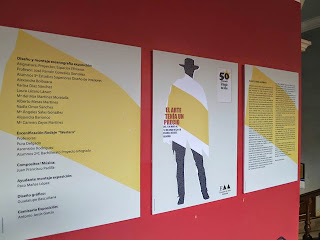 The Art School of Almería opens tonight at 8 p.m. an art cloister Er Arte Tenia un Precio’ (Art Has a Price).  To celebrate the fiftieth anniversary of the shooting in Almeria Death Had a Price (For a Few Dollars More), from the basic Dollar film trilogy by the Italian director Sergio Leone. The Art School of Almería pays tribute with a multidisciplinary, contemporary and innovative educational project in which students participates and collaborate different lessons taught at the center.

Antonio Jesus Garcia Che, Head of Extracurricular Activities of the School of Art explains: "We wanted to pay tribute to Sergio Leone because For a Few Dollars More fever has broken out for the 50th Anniversary of the filming in the city. From the school The Art of Leone, we believe that it should be celebrated every year as they do with Mozart in Vienna. We should be aware of the importance of the Italian filmmaker to Almería".

"We propose to pay tribute to Leone, and the School of Art as an educational community involved with society have decided to make a very personal vision about the filmmaker and that movie was so important to the province of Almeria. It is the second film that Leone made in Almeria, which is recorded here and the which made the village of Mini Hollywood, which he also built, famous" says Antonio Jesus Garcia.

The exhibition includes works from different disciplines taught at the School such as engraving, ceramics, photography, painting and graphic design.  The samples are very original and will surprise the audience tonight who decide to attend the inauguration.  The exhibition will be open until the 12th of June.

A series of costumes inspired by western aesthetics that were developed by the Department of Modelling and clothing will be displayed.  In such an original way, the School of Art celebrates the 50th anniversary of the filming of For a Few Dollars More, by the cult director Sergio Leone.

Tonight a group of students from the Education Project School will stage a theater miniobra which is allegedly the shooting of a Western in a modern interpretation of the can-can.
Posted by Tom B. at 2:06 PM