Who Are Those Gals? - Dominique Boschero 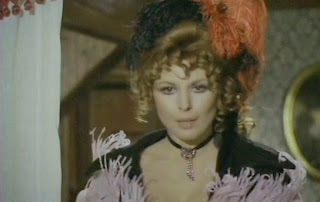 Dominique Jacqueline Angele Boschero was born in Paris, Île-de- France, France on April 27, 1937. Born in France to Italian parents and the sister of producer, actor Martial Broschero was at the outbreak of World War II, entrusted to her grandparents where she spent her childhood in Frassino, Italy.

At 15 she returned to Paris, where she began working first, as an orderly in a hospital, then as a seamstress and then, owing to her remarkable beauty, as a model.  At 18 she made ​​her debut in the magazine of the local Parisian Nouvelles Eve and began her career as a showgirl and an actress in small roles.

Sometimes credited as Dominique Bosqueró, she became an icon of Italian cinema: in her short but intense film career, which leads to her frequent performances in many films, ranging from the Italian comedy to Spaghetti westerns, from thriller to horror, from the historical mythological and fantasy films.

She is linked romantically with Gian Maria Volonte, and is hit by a scandal over an alleged bomb in the Vatican.  This episode and her relationship with the Volonte’s brother Claudio Camaso, that - after the involvement in a murder - he committed suicide, this slowed down her career.  Another important romance is the one with the singer Franco Califano.

At the end of the sixties in Frassino she meets François Fontan, Occitan theoretician of autonomy, and the poet Antonio Bodrero, and gets involved actively in the ethnic and linguistic Occitan.

In 1974 she leaves the cinema and retires to Frassino, a village in the Val Varaita, speaking the Occitan language.  In 1989 Boscehro reappears on the TV screen in the soap opera ‘Passioni’, directed by Riccardo Donna and broadcast on Rai Uno.