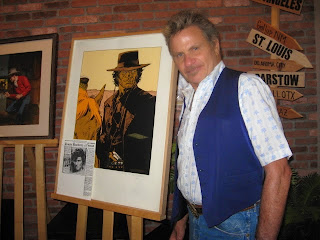 At the July 16th Word on Westerns meeting at the Autry Museum in Los Angeles, Marty Kove discussed his dealings in trying to make first a film and then a TV series based on the French Western Comic Book hero Lieutenant Mike Blueberry. Kove said that while he was co-starring as Detective Victor Isbecki in the ‘Cagney & Lacey’ TV series from 1982-1988 he was approached by a casting director to play the role of Blueberry in a French produced film. Knowing nothing about the character he researched the comics and discovered his striking resemblance to Mike Blueberry and found out how big a hit the comics were in France. He then whole-heartedly attached himself to the making of the picture both time wise and financially. Try as they did they could not obtain the money to produce the film. The film was finally made with French actor Vincent Cassel in 2004. The film was released here in the U.S.A. as “Renegade”.

Kove then turned to trying to develop a TV series based on the adventures of Lieutenant Blueberry.