Who Are Those Guys? - Bruno Boschetti 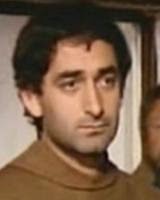 Bruno Boschetti is among a long list of Italian supporting actors where virtually nothing is known. Most likely born in the 1940s he first appeared in films as a guerilla fighter in 1968’s “Bloody Che Contra” (Diary of a Rebel) directed by Paolo Heusch. He went on to appear in over 70 films and television appearances among which were fourteen Euro-westerns. He retired in  after his final appearance in 1980’s “"L'ebreo fascista” (The Fascist Jew).