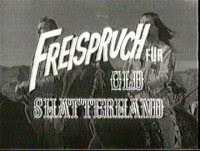 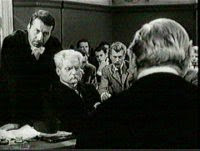 This TV film covers the trial of Karl May who was sued by a rival named Rudolf Lebius for liable. The trial was held before the Schöffengericht Berlin-Charlottenburg on 12th  April 1910. Lebius brings to the trial evidence of Mays previous convictions.  In flashbacks May recalls his time in labor while in the penitentiary and recounts various crimes with his sidekick Priegel. Mays lawyer and May even try to show the "other side"; to clarify the causes and psychological reasons that made him a criminal. The lawyers prove that May has been reformed. Involved are Mays fantasies in the form of film clips from the Karl-May-movies with Lex Barker and Pierre Brice.

A 1965 German television production by C.C.C. shows Karl May's life from his perspective, punctuated with scenes of the CCC films that represent a sign of Mays dream world. In the end Karl May has been legally convicted of past crimes he is now morally right and reformed.