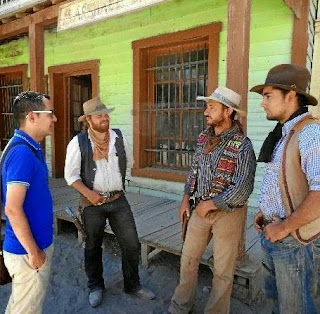 An episode of the Spanish TV series Cuatro Milenio (The Fourth Millennium) investigates the reports of a stuntman who died tragically in 2007 who now haunts the Fort Bravo film set in the desert of Tabernas of Almeria. The ghost is friendly and keeps an eye on his colleagues who work at the film studio.

Cuarto milenio is a Spanish television program directed and presented by journalist Iker Jiménez and Carmen Porter. The program has been broadcast weekly on television channel Cuatro since November 2005. The program explores various topics such as conspiracy, occult, criminology, ufology, psychology, parapsychology, demonology, archaeology, history, and zoology.
Entire film: http://www.dailymotion.com/video/x201f8c_el-fantasma-de-fort-bravo-cuarto-milenio-cuatro-tv_shortfilms
Posted by Tom B. at 5:48 AM