I’m an Italian actress born in Palermo, Sicily in 1926.

I appeared in six Euro-westerns in one I was married to Joseph Cotton. 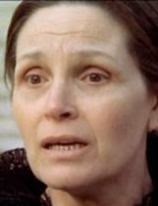