TWO PISTOLS AND A COWARD 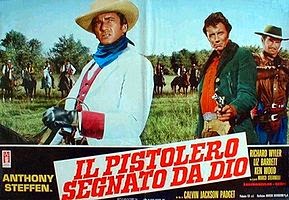 Gary McGuire, a young man who earns a living as a circus performer showing off his skills in pistol shooting, assists, unseen, in the killing of several outlaws left behind by their boss Roy Owl, who takes possession of the proceeds of a robbery. The massacre is attributed to Gary who, not having the courage to deny it, becomes the object of general admiration that turns into ridicule, when the real culprit, beats him in a contest of skill, making him look ridiculous in front of everyone. In fact, Gary is the victim of psychological trauma suffered as a boy, when he was accused by his father of the accidental death of his brother, which stops him from carrying out every aspect of violence. So when Tony, a boy, whose father was killed by a certain Coleman, enlists the help of Gary, to regain possession of his property. Coleman, is informed that Tony knows the place where his father hid the money, does not hesitate to kidnap the boy and seize Gary, to help locate the cache. The sight of the boy being beaten, is finally able to shake the numbness of his trauma. Gary manages to escape during the night and alone, attacks the Coleman ranch. His exceptional abilities, as well as the unexpected and timely help of his old comrades from the circus, soon turn the tide in his favor. Coleman is killed and Owl is brought to justice.
Posted by Tom B. at 5:41 AM