We continue our search for film locations for “Texas Adios” (aka The Avenger). After Burt and Jim join a band of men transporting women to Cisco Del Gado they stop at peasant’s house where and old man and his daughter are living. One of the men forces the young woman on to the wagon and when her father objects he is shot dead. Jim, infuriated by the cold blooded killing and threatens to kill the band of men and tells the women to flee. He’s stopped by Burt whose main concern is to find Del Gado not interfere in what is developing in the process. Jim calms down and the journey continues.

The location of the peasant’s home is in Puntal de Polopos. This area was at one time a town and sits below the current village of Polopos. Today only the one large house seen in the picture remains while the rest of the village is complete ruble. Several other Euro-westerns have used this location including “Johnny Yuma”, “Sonny and Jed”, “God Forgives… I Don’t” and “A Bullet for the General”. 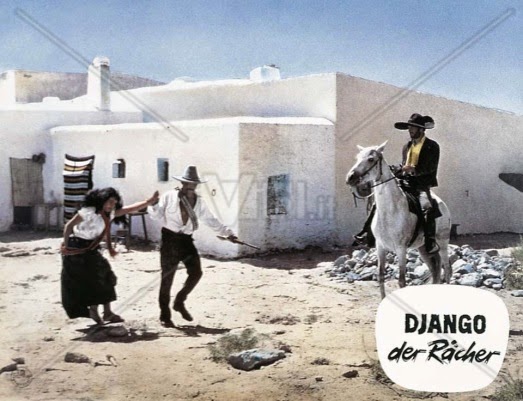 For a more detailed view of this site and other Spaghetti Western locations please visit my friend Yoshi Yasuda’s location site: http://y-yasuda.net/film-location.htm
Posted by Tom B. at 6:35 AM