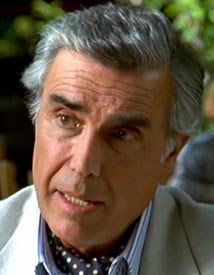 George Hilton was born as Jorge Hill Acosta y Lara on July 16, 1934 in Montevideo, Uruguay. Although he was born in Uruguay, he grew up in England. He began his career working in radio. In 1955 he moved to Argentina, adopting the pseudonym of Jorge Hilton and begins to appear in several soap operas and film production for the domestic release.

In 1963 he moved to Italy following the example set by other South American actors such as Jorge Rigaud and Alberto de Mendoza, who were attracted by the thriving Italian film industry. After Anglicizing his name to George, he gets the lead role in a film “Il corsaro nero nell'isola del Tesoro” (1965) and appears in the Franco and Ciccio 007 comedy “Due mafiosi contro Goldginger” directed by Giorgio Simonelli.

His career in the Euro-western genre was launched by director Lucio Fulci with the film “The Brute and the Beast” (1966), starring Franco Nero and soon became an icon in the genre. In the following year he participates in seven productions feeding his international reputation and receiving much attention, especially in Spain. Hilton became one of the biggest stars of Italian cinema along with Terence Hill, Franco Nero and Giuliano Gemma. His most famous character is definitely one of the gunslinger in the western Hallelujah, created with director Giuliano Carnimeo and subsequently Tresette. George appeared in over 20 Euro-westerns.

Later George appeared in other genres, from drama to war movies, and finally the Giallo with the film by Romolo Guerrieri “The Sweet Body of Deborah” (1968). Equipped with a dark languid charm, the actor is perfectly suited to the genre, and so is called upon to interpret some of the most respected titles in the genre including: “The Strange Vice of Mrs. Wardh” (1970), “The Tail of the Scorpion” (1971), “All the Colors of the Dark” (1972), directed by Sergio Martino and “Perché quelle strane gocce di sangue sul corpo di Jenifer? (1972) by Julian Carmineo, usually accompanied by Edwige Fenech .

Hilton participates in detective films “Torino violenta (1977), the comedy “Taxi Girl” (1977) and the fantasy adventure “Raiders of Atlantis” (1983), by the 1980s his appearances became increasingly rare. He appeared in the TV movie ‘Dinner with the Vampire’ (1988) and the TV series ‘College’ (1989), the miniseries ‘Three farewells’ (1999). In 2007 he returned to the big screen in the film “Natale in crociera” by Neri Parenti in the role of the captain of the ship on which the characters weave their stories. George was honored at the 2013 Almeria Western Film Festival.