We continue our search for film locations for “Texas Addio” (aka “The Avenger”). After meeting with the lawyer in on a back street and refusing to join his revolutionary group against Cisco Delgado Jim and Burt leave. The lawyer is attacked by the Indian henchman of McLeod for talking with the gringos. When the Indian tries to knife the lawyer he’s shot and killed by Burt. McLeod tells the Alcalde to stop drinking and tells him he’ll send out a party to take care of the Sullivan brothers.

As the Sullivan brothers, now on foot, continue their search for Delgado Jim asks Burt about the possibility of arresting Delgado. Burt tells him this isn’t Texas. 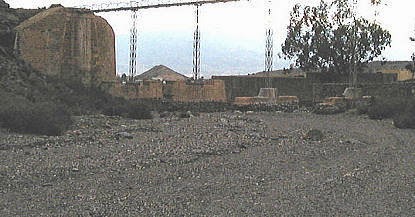 The site of their discussion is Sierra Alhamilla, Spain.

For a more detailed view of this site and other Spaghetti Western locations please visit my friend Yoshi Yasuda’s location site: http://y-yasuda.net/film-location.htm