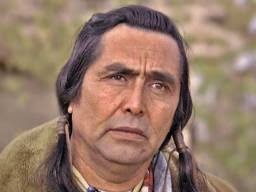 Frank Fernando Salsedo was born on May 20, 1929 in Santa Rosa, California, U.S.A. Frank graduated from Sherman Institute and then enlisted in the Navy. After his discharge he became a CPA and graduated from Sawyer's Business College. He was the President of Jay Silverheels Acting School in Los Angeles, California where he found his dream job as an actor. As a member of SAG he made over 50 movies and helped other Native Americans in the industry. Frank was the hereditary Chief of the Wappo tribe of Sonoma County, California.

Frank appeared in only one Euro-western as Nakki in “North Star” (1995) starring James Caan.

Today we remember Frank Salsedo on what would have been his 85th birthday.