For a Fistful of Dollars given special showing in foreclosure 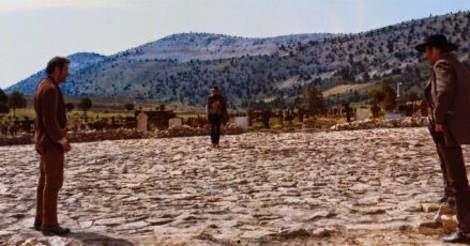 The western, American genre par excellence, as defined by the theorist André Bazin, had a high profile at 67th Cannes Film Festival. In the Official Selection, two films have turned to the roots of the genre. The American Tommy Lee Jones had his second feature film as director, The Homesman, teasing in Competition. Danish director Kristian Levring brought the talented Mads Mikkelsen as a lone avenger in The Salvation, which was exhibited at Midnight Session .

But the big honoree was Italian Sergio Leone, regarded as the father of the Spaghetii western. To commemorate the 50th anniversary of the explosion of the sub-genre - which has become a genre of its own - the festival organizers exhibited the dollar trilogy. In section Cinema de la Plage, won the open view on the beach of Cannes, For a Few Dollars more and The Good, the Bad and the Ugly. However, the apotheosis was expected to submit a Fistful of Dollars, the film that opened the trilogy, at the end of the festival, on Saturday night (May 24).

It was the film that marked the beginning of the Italian bang-bang, as the genre became known in Brazil . To live up to the anniversary, the guest session was presented by the American filmmaker Quentin Tarantino. In fact, he was in Cannes for a double anniversary. Pulp ficction, which gave him the Palme d'Or in 1994, turned 20, and the film had a special exhibition programming of Cinema à la Plage. Pulp fiction was the only film shown throughout the festival, on 35mm film.

At the press conference, held on the afternoon of Friday May 23rd, Tarantino explained why he was honoring the film in spite of his most famous film. "Cinema I know no more. The DCP equals you watch in on public TV. The cinema is dead", declared the filmmaker. About Sergio Leone, he was clear in saying that the Italian director is one of the great influences of his work." Leone brought to the movies a great novelty, the use of music in the foreground, not as background" he explained.

Tarantino said that he does not use original tracks because he does not trust a person you barely know to compose the music for his films." I use what has already been done, for example, Ennio Morricone. But I do not steal, the songs are very well paid", he said. He said he watched the films of Leone too early. "I was between four and five at his first viewing “The Good, the Bad and the Ugly. Even today, I show these movies in the evening to my actors and their children when they are on set," he confided.

For a fistful of dollars was responsible for leveraging the career of Sergio Leone and Clint Eastwood, who was known by the nickname of "the man with no name". Eastwood is a stranger who comes to town of San Miguel, on the border between Mexico and the United States, and engages with two gangs fighting for local power. For money, he accepts the two proposals, playing a double game and ruining the bandits. The Italian actor Gian Maria Volonte was also showcased in the movie.

A new copy of A Fistful of dollars just been restored by Cineteca di Bologna and Unidis Jolly Film, the original producer and distributor of the film, with the participation of the Foreign Press Association of Hollywood and the Film Foundation, Martin Scorsese. The work was developed in the restoration lab Immagine Ritrovata, considered the most important in the world.

The original negative was scanned Techniscope in 4K resolution, under the supervision of cinematographer Ennio Guarnieri. For sound, the laboratory had access to the original tapes that are still the original pre-mixed sound, with the soundtrack and effects separately.