Mads Mikkelsen stars as a Danish soldier who moves to America in Kristian Levring's Western.

A trunk load of classic Western archetypes (or stereotypes -- take your pick) are given a robust workout in The Salvation, a Danish Western by Dogme charter member Kristian Levring. Employing a strong visual style that evinces a great affinity for the genre, as well as for two of its most prominent practitioners, John Ford and Sergio Leone, the director also supplies a bleak, forbidding -- one might say fundamentalist Nordic -- temperament that well suits the themes of punishment, suffering, vengeance and redemption. Commercially, this falls in a difficult zone between the commercial and art film; some specialized U.S. play could be in the offing -- the film looks great on a big screen -- but prime cable showings, pitched at fans of the stars Mads Mikkelsen and Eva Green, could prove a more lucrative and receptive market, at least in North America.

The basic plot of the script by Levring and Anders Thomas Jensen owes a great deal to the Fred Zinnemann-Carl Foreman High Noon, in which it falls to a single man to rid the town of a bunch of bad guys who have terrified the populace into submission. In fact, The Salvation is assembled of nothing but the most elemental components of the Western, which gives genre specialists a lot to recognize and analyze and newcomers something to enjoy for its own sake.

The one overtly Danish element is introduced at the outset, with protagonist Jon (Mikkelsen), presented as a former Danish soldier who left for America after the 1864 war and has now, after seven years, brought over his beautiful wife (U.S.-based Danish musician Nanna Oland Fabricius) and 10-year-old son (Toke Lars Bjarke). But no sooner have the latter gotten off the train in the far West than they are kidnapped and murdered by two drunken nasties who, in short order, are tracked down and shot by the bereft Jon. Unfortunately for him, one of the two killers was the brother of ruthless local gang leader Delarue (Jeffrey Dean Morgan), who rules the town of Black Creek so viciously that he randomly kills four innocent locals when his deliberately outrageous demand of finding the killer within two hours is not met.

The town’s sheriff (Douglas Henshall) and mayor/undertaker (Jonathan Pryce) cower to the depraved Delarue, who takes advantage of his brother’s demise by having his way with his wife, Madelaine (Green), whose beauty is marred by a large scar across her lips and is mute due to an Indian having cut out her tongue. Once he gets his hands on Jon, he strings him up on a pole like a side of meat to give him time to contemplate his fate, while Jon’s sharp-witted brother Peter (Mikael Persbrandt) languishes in jail. 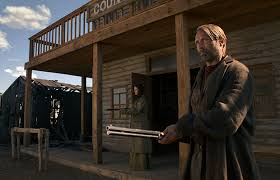 From here on, it’s all a question of how the brothers will escape their extreme jeopardy to exact revenge on Delarue and his gang. As in any classic Western, there are blunt pleasures to be had every time the tables are turned on men in black hats, as well as from direct, threat-loaded dialogue, meaningful looks, geometric arrangements of heroes and villains, and tense hunts for prey that play out both in rugged mountain settings and the tight quarters of buildings.

There may be a moment or two when a too-on-the-nose use of a cliche provokes an unwanted laugh but, by and large, Levring employs Western conventions knowingly enough to get a pass. On a straightforward level, his staging of classic standoff and showdown moments is quite good and he achieves the right kind of audience satisfaction when the bad guys eat it.

Visually, The Salvation is resplendent in the rich reds and browns of the land and relatively new buildings of the town. But there’s also something a bit unusual about the look of things, the way the full moon floods a nocturnal setting with light and how the unmistakable background of Monument Valley seems a bit soft compared with the vivid foregrounds in numerous scenes. This is because the film was actually shot in South Africa, with some 900 shots visually altered through CGI and various digital and backdrop alterations. The technical work is actually excellent and won’t raise an eyebrow of 99 percent of viewers. But to anyone in the profession or with an eye for such things, the film’s visual aspect represents a clever and quite sophisticated blend of on-location photography and postproduction manipulation.

The actors all seem quite invested in playing archetypal parts in a fun genre that doesn’t present itself with nearly the frequency that it used to. The dazzlingly handsome and physical Mikkelsen splendidly suits the vengeful hero role; the primary requirements for him are to be sweaty, bloody, suffering and cunning nearly all the time and he delivers it all with complete satisfaction. Persbrandt embodies equal Old West aptitude as the hero’s brother, while Morgan registers wonderfully as the deeply cynical, morally void villain. Green’s acting here is done entirely with her eyes, which say plenty.

Kasper Winding’s score has a flavor and full feeling of its own, even as certain moments reverberate with distant echoes of Ennio Morricone. The final pull-back shot sends out its own signals in the direction of the early 20th century West of There Will Be Blood.