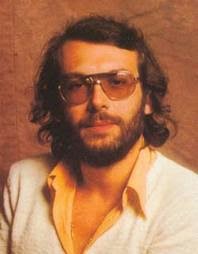 In 2003, he arranged the strings on Madonna’s album ‘American Life’.

The title he is probably most famous for is ‘Emmanuel’ which served from 1975 to 1983 as the musical opening and closing for TV channel Antenne 2; it was an animated film of 80 seconds by Jean- Michel Folon representing "flying snowmen" , appearing and disappearing in a starry sky. Michel Colombier Emmanuel named this music in memory of his son who died while still a child. Colombier scored one Euro-western: “Posse” (1992).

Colombier and his wife Dana and their children moved to the United States where he died of lung cancer at the age of 65 in Santa Monica, California on November 14, 2004.

Today we remember Michel Colombier on what would have been his 75th birthday.