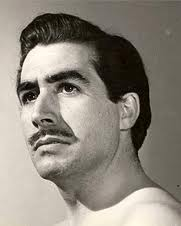 Paolo Solvay was born Luigi Batzella on May 27, 1924 in San Sperate, Sardinia, Italy. Paolo was an Italian Z-movie director, writer and former actor who used numerous pseudonyms. Some of them were Ivan Kathansky, A.M. Frank, Gigi Batzella, Paul Hamus, Dean Jones, Paul Selway and several others.

Although his films were generally inept, Solvay did get to work with a number of established B-actors of the time like Richard Harrison, Gordon Mitchell, Brad Harris, Rita Calderoni and Mark Damon. There is some conflicting information on whether his real name was Paolo Solvay or Luigi Batzella. According to the IMDb it's Batzella, according to Gordon Mitchell and Richard Harrison, it's Solvay.

Solvay's directing career ranged from the late 1960's to the late 1970's, after which he seems to have retired from film. Today, he's remembered mostly for the Nazi-exploitation films and being an Italian version of Ed Wood.

His films numbered 15, of which he also edited and wrote himself, all of them were very low budget, his first three films were westerns, shot in the same town, featuring scenes from each other inserted into the narrative and stock footage. He produced three war films, several years later, these all contain footage from each other, SS Hell Camp consisting of much stock footage, and shot in a single lab set. The rest of his films, were either shot on preexisting sets or with even more minimal budgets.

Today we remember Paolo Solvay on what would have been his 90th birthday.