Who Are Those Guys? - Modesto Blanch 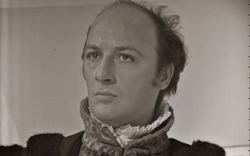 He was a television pioneer in Spain, and was a regular face in TVE for more than 30 years since the beginning of the medium in the 1950s.