We continue our search for film locations for “Texas Addio” (aka “The Avenger”). After the brother Burt and Jim Sullivan cross the border into Mexico pursuing the killer of the their fathers fifteen years ago they arrive at the town of Sierra Majada. They enter a bank and exchange dollars for pesos. After the exchange they ask the banker if he knows of a man called Cisco Delgado. The banker says he knows the name but has never met Delgado as he’s never been to Sierra Majada. Leaving the bank they see a group of peons being led by a contingent of Mexican soldiers in the command of the Alcalde Miguel. The peons are lined up against the wall of one of the towns buildings and every time the Miguel pops his canteens cork one or more of the peons are shot and killed. When they are all killed the soldiers march off and Miguel asks if the Sullivan brothers have enjoyed the entertainment. The alcalde then rides off and the Sullivans enter the Posada for a drink. 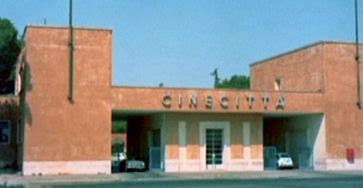 The Mexican village set at Cinecitta in Rome was used for the town of Sierra Majada. It has been used in several Euro-westerns shot in Italy such as “5 Giants from Texas”, “The Fury of Johnny Kid”.

For a more detailed view of this site and other Spaghetti Western locations please visit my friend       Yoshi Yasuda’s location site: http://y-yasuda.net/film-location.htm
﻿
Posted by Tom B. at 6:54 AM